Removing the Training Wheels from the US Economy: Are We There Yet? 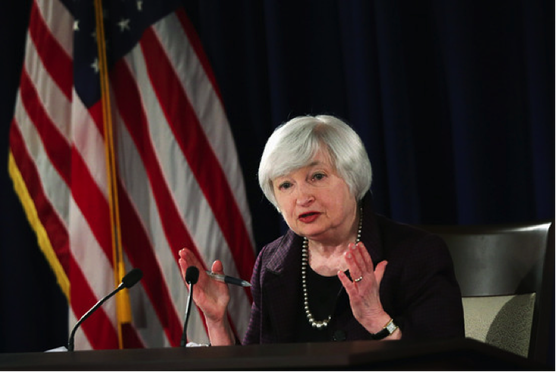 Last month financial institutions, market analysts, and investors alike were all waiting with bated breath for word to come from the mid-September meeting of the Federal Reserve. To much surprise, Janet Yellen and the rest of the Fed had decided not to increase federal interest rates, signaling that seven years after the financial crisis of 2008, our economy may still not be strong enough to wean off of the easy money strategy.
The Federal Reserve has two main priorities, to keep employment high (where full employment is equivalent to an unemployment rate of about 4%) and inflation low, at about 2%. To accomplish these goals, the Fed controls the federal funds rate, or the rate at which banks can loan money to each other. A low federal funds rate allows banks to lend money out to individuals and companies at lower interest rates, which makes it more attractive for people to take out loans. This borrowed money is used by individuals and families to buy cars, purchase homes, and pay for college tuition. Companies can use loans to purchase more capital, invest in new technology, and produce higher output. These expenditures by families and businesses alike pour money into the economy, increasing economic activity and the GDP. The only drawback from this strategy is that low interest rates hurt people with savings accounts, as their money earns less interest than it would in times of higher interest rates. Similarly, people who hold government bonds receive less of a return on their purchase. The low returns on government bonds may encourage the buying of other investments such as private stocks, which can have both higher risks and higher rewards.
In contrast, tight money policy means higher interest rates, in which banks are likely to give out fewer loans due to the increased federal funds rate. Savers and bondholders alike get more bang for their buck but those trying to take out loans or mortgages may have a harder time paying back their monthly interest. Employment may suffer to some extent (since there is no longer an artificial boost in economic activity) but inflation, or the value of the dollar, is kept in check so that prices remain reasonable.
Not since 2006 has the Federal Reserve increased the federal funds rate. Since the economic recession of 2008, the federal funds rate has been kept around zero to one-quarter of a percent in efforts to combat high unemployment and high inflation that resulted from the 2008 financial recession. Now that the unemployment rate as of September is 5.1% and inflation is not problematic, many financial and market analysts thought that a higher federal funds rate (meaning higher interest rates) would receive the “go-ahead” for the first time in almost 10 years. Yet Janet Yellen was not so sure of the current economic stability, citing in a statement the low inflation—which is still under the target rate of 2%--to be more troubling than one might think at first glance. During easy money policy, in which money is pumped into the economy by the Federal Reserve’s low federal funds rate, inflation is naturally supposed to rise from this increase in monetary supply. As noted, however, this has not been the case. Going into the seventh year of low interest rates, low inflation could signal a weak economy that would face extreme challenges when federal funds rates are increased.
Thus while the US economy seems to be fully recovered from the recession, indicators of economic growth suggest that it may still be too early for the financial training wheels to come off. Not only is low inflation a less than welcome sign, the inauspicious conditions of foreign markets that occurred earlier this year in places such as China, Greece, and even our own Puerto Rico have upset the global market, making foreign investors around the world uneasy and more likely to sell their governmental bonds in order to distance themselves from the impacts of these economic downturns.
While the implications of insecure foreign markets and their eventual recovery cause uncertainty for the United States, domestic labor policies such as raising the minimum wage and providing paid family and medical leave are becoming increasingly popular and could quite easily place additional strain on businesses in the years to come (without any talk of the burden that would also be induced by higher interest rates). As seen last week in the case of Wal-Mart, raising its minimum wage to $9 an hour in April saw a higher-than-predicted drop in annual profits and a 27-year-low in the stock market. Of course not all of these effects can be attributed solely to voluntarily increasing its cost of labor, yet they are dire enough to dissuade other corporations from following in the retail giant’s footsteps. However, the long-term benefits of these types of employee-friendly policies are not yet measured, meaning that worker retention and higher productivity could increase profit in the long run. Nevertheless, raising interest rates would not only hurt businesses dealing with higher costs of labor, but individuals who would have less power to advocate for worker-friendly policies that are expensive in the short-run.
Thus while many investors and analysts were complaining at the lack of action by the Federal Reserve in September, their decision to keep rates at the status quo seems to be the safest call as of now. What will happen later this year in Federal Reserve meetings this week and in December is another matter altogether, as many are anticipating at least a marginal increase in the federal funds rate at the end of this year or the next. What this will mean for inflation, job growth, foreign markets, and labor policies, for now, we can only speculate.