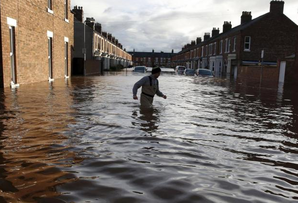 Usually the month of December is reserved for pontificating about the holidays and reflections for the year gone by and year to come.  The end of 2015 was a little different though.  As we reflect on the successes and failures of the landmark United Nations Climate Change Conference held in Paris, it is worth noting that regions in 4 continents were inundated with water.
The United States of America, South America, The United Kingdom, and South India received “historic” levels of water, with thousands of residents evacuated, many lives lost, and billions of dollars in damage.  These floods were attributed to heavy rains due to the combination of the rapidly changing climate and the El Nino phenomenon, creating a so-called “perfect storm”.  However while we are quick to describe these floods as extreme weather events, records show that these extreme events are not entirely unpredictable.  Floods are an almost yearly event in some areas. Flooding is the #1 natural disaster in the United States.  All the areas mentioned earlier have experienced previous flooding with property damage and loss of life.  Furthermore we can almost guarantee that 2015 will not see the last of these “historic levels” of water.  In fact,  experts agree that, due to climate change, these events are going to get worse.
Flooding is attributed to poor drainage infrastructure as well as the destruction of natural riparian areas and, with regards to the UK, denuded hillsides.  Whilst large levees and other such structures are constructed to protect against water, flood plans generally ignore the protection that natural wetlands provide.  Paradoxically,  we are more likely to drain these natural wetlands for more economically beneficial purposes such as agricultural land, highways, or apartment buildings, thus rendering these areas extremely vulnerable to the threat of floods.  It is quite frankly an absurd situation which stems from our failure to understand the true value of natural features.  2005-2014 saw a yearly average of 3.5 billion dollars on flood insurance claims in the U.S, the floods in Chennai and the UK cost close to 7 billion USD.  This begs the question whether restoration and protection of uplands and wetlands would cost even a fraction of that.
There needs to be a rethink in the way flood defense systems work. As George Monbiot writes “building higher walls will not, by itself, protect our towns”. Protection and restoration of natural wetlands which allow water to drain into them as well as improved “green infrastructure” that incorporate the natural environment and engineered systems provide the best defense. Almost 99% of green cover has been replaced by non-vegetative cover in the city of Chennai, while widespread destruction of upland vegetation in the UK has undoubtedly contributed to the excessive damage.  It has to be remembered that while we may be able to build costly, complex systems, ultimately nature works best.
We cannot stop these extreme weather events nor can we mitigate against total avoidance of damage.  However the floods from 2015 show that planning decisions are exacerbating the damage caused by these floods.  Ignoring the natural ecology of the land for the sake of development or ‘progress’ is clearly doing more damage than good and these floods portray a ‘one step forward, two steps back’ kind of scenario.  Furthermore government responses to flood events are akin to treating symptoms as opposed to reforming their city planning.  However, as a small town in Yorkshire, UK and coastal villages in Kenya show, when planners think smart about their natural environment, flood defenses can be constructed a fraction of the cost.  We may not be able to stop the rain but we can limit the damage by demanding more from our leaders and work with, rather than against, nature.