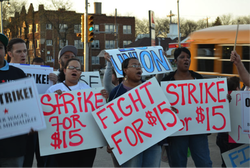 This Labor Day, something strange happened: people actually talked about labor in America.  This was due to a coordinated strike of fast food workers in over 60 cities at the end of August.  The strikers demanded a doubling of their wage from the federal minimum of $7.25 an hour to a “living wage” of $15 an hour.

This ambitious demand is not likely to be met by fast food corporations, franchises, or the government.  Their strike is significant; however, because it reminds the country how difficult it is for low skilled, undereducated Americans to support a family or even themselves.  A budgeting website for McDonalds employees infamously suggested they work a second job and allocated just $20 per month for health insurance (which McDonalds, of course, does not provide).

McDonalds’ tone-deaf attempt to improve its workers financial literacy calls attention to just how difficult it is for someone working full time (and then some) to support him or herself on the minimum wage.  This is largely because the federal minimum wage’s relative purchasing power is lower now than at any point since its inception, reaching only 36% of the average private sector wage (from a high of 54%).  With fewer employers offering non-pecuniary benefits than in previous decades, this creates an entire underclass of hardworking Americans, who have no choice but to depend entirely on government programs, and have no opportunity for better employment or further education.

This is particularly harmful because food service is one of the fastest growing industries in America, coinciding with a precipitous decline in manufacturing jobs, which attract a similar demographic, but offer higher pay and more benefits.

Stereotypes about fast food workers are no longer hold true.  Only 30% are in their teens and over ⅓ of all workers are raising a child.  Almost all employees have a high school diploma and a third have some college under their belts.  The bottom line: these aren’t teenagers trying to make some money on the side; fast food service is the primary source of income for a growing number of households.

So what can be done about these workers?  The federal minimum wage was last raised in 2007 and hadn’t been raised for a decade before that.  The minimum wage in 1968 is equivalent to $10.10 in today’s dollars.  President Obama wants to increase the federal minimum wage to $9 an hour with automatic 1-2% increases each year.  Some economists argue that an increase would decrease employment opportunities for low skilled workers, as more expensive labor would shift company investment into capital or more training for fewer employees; others disagree.

The California State Assembly just voted to increase the state’s minimum wage to $10 an hour over the next few years.  Given California’s high cost of living, it’s unclear how much better off their minimum wage workers will be compared to those in the Midwest or the South.  It will, however, give economists an opportunity to evaluate the effect a significant minimum wage increase will have on employment (California’s current minimum wage is $8.00 per hour).  Any data produced will likely be manipulated to support partisan positions, but this significant increase should provide a better opportunity for research than the more marginal increases that have been the norm.

Minimum wage increases at the federal level are controversial and politically dangerous.  A hike is unlikely to come from the 113th Congress.  There is, however, a strong case to be made for increasing the Earned Income Tax Credit (EITC).  Doing so would cost significantly less than raising the minimum wage to $9 an hour, but would benefit poor families a comparable amount.  This is largely due to the EITC’s eligibility requirements that prevent dependents (teenagers) from taking advantage of its wage subsidies.  This option ensures that those receiving federal tax subsidies (Mitt Romney’s 47%) benefit more than those using a minimum wage job to afford prom tickets.

As income inequality grows, it’s time to take a step towards helping those who are trying to help themselves.