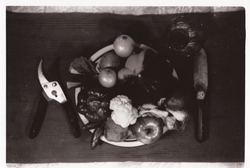 The ‘Green Revolution’ that began in the 1960’s describes the phenomenon of global agricultural advancements through innovations such as synthetic fertilizer, genetically modified crops and industrial farming technology. The technological advances and increased crop yields made it possible to feed billions more people around the world and to solve the then-imminent problem of famine. In turn, it enlarged both the global market and the U.S. dependence on foreign imports.

It is crucial to note that most of the agriculture that supplies our food system (the sum of all parts and processes involved in feeding a population) depends on fossil fuels. Oil is used to create ammonia fertilizer in the Haber-Bosch nitrogen fixation process; oil is used to pump electric wells for increased irrigation; oil is used to power industrial farm machinery. Most notably for the purpose of this article, oil is used to transport our food commodities once they are grown and processed.

Understanding that oil is a non-renewable resource, it is easy to see why our food system is resting on such fragile foundations: oil is undoubtedly running out. Yet agriculture remains one of the world’s largest producers of Greenhouse Gas Emissions, contributing up to 24% of all GHG emissions worldwide. This includes the cultivation, inputs, transportation of input and products, processing and distribution.

The Worldwatch Institute reports that the average distance that a normal American food item travels is about 1500 miles. One study revealed that transportation of products from source to store constituted 11% of all greenhouse gas emissions in agriculture. But fuel consumption in transportation is only one contributor to the environmental impact of the production of one’s food - all of the pieces are encompassed in a ‘foodprint.’ A true agricultural revolution would involve reforming the whole process, but each contributor can be addressed individually. For this reason, a viable option for decreasing our foodprint may include a concerted effort towards retracting our foodsheds.

A ‘Foodshed’ - a term coined by researchers from Cornell University - is analogous to a watershed in its function, in that it is defined as the region that produces food for a particular population. Creating foodshed calculations requires a fair amount of data, but much of it is already available in Geographic Information Systems (GIS) format, through government surveys and scientific studies. The calculation requires statistics on dietary needs, food transportation, agricultural efficiency, climate and production potential.

If we want to reduce our foodprint, it is time we begin to pay attention to the sustainability and geography of our foodshed. With government assistance, it could be feasible to organize food cultivation and distribution in a sustainable, local manner, based on foodshed maps. This strategy is replicable for many regions, as the researchers involved in the initial study have already started developing foodshed maps beyond NY to NM, MI and MO.

The researchers argue, with the support of many others, that the local food movement is a perfect solution to retracting a foodshed from a global sphere, to one closer to home. The idea of foodshed retraction is hardly original, as the local food revolution is not a new phenomenon. Instead, it has been around long enough to call attention to the recovery of a way of life in which people strive to be closer to their food sources. It has spurred the creation of new words like ‘locavorism,’ supported the growth of farmer’s markets and has even changed what is found on supermarket shelves. Often, the benefits of local food go beyond decreasing carbon emissions from transportation to improving health with more nutritious food and supporting the growth of stronger communities. Yet, it remains far from ubiquitous, sometimes unattainable, for those who cannot afford it and out of reach for strong transport systems already in place.

A strategy that includes foodshed mapping and policy advocacy emphasizing reorganization is the only way to approach such a multifaceted issue as foodsystems. Bringing people closer to their food through education, markets and transportation is crucial. But reorganizing food distribution using tools like Foodshed calculators and working with farmers and distributors is just as important in bring food closer to people. Large groups of people usually can’t bring about the most efficient forms of change as they have little control over the production parts of the market. But with government-facilitated aid, it is possible to have more equity, efficiency and inherently, sustainability in our food networks. To move forward sustainably, we must begin to apply our global and technological knowledge to local systems and coordinate top-down approaches to redesigning food networks.