Review of "Capital in the 21st Century" 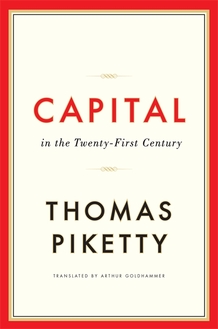 Thomas Piketty's book, "Capital in the Twenty-First Century" is for sure going to be a classic. As a treatise that deals with some of the most pressing economic and social issues of our time, this work systematically describes a problem, namely economic inequality, and proposes a solution: a progressive tax on capital.

His central thesis is that if the rate of return on capital (r) is greater than the total growth of the economy (g), then inequality will increase over the long run. To explain this concept more generally, If I own an apartment complex worth $100, and it produces a profit of 10% per year, but the whole economy only grows at 1% per year, then as the years go on, I am going to get wealthier and wealthier compared to society as a whole. If the wealth of the country is set to grow at a slower rate than my wealth will grow, by definition, my wealth will become a larger share of the nation's wealth as time goes on.

He goes on to argue that the rate of return on investments is increasing, r is getting bigger, and growth is slowing, g is getting smaller. But Piketty introduces another concept: the nationally accumulated amount of capital at a certain year/national income per year ratio, which he dubs β. Simply put, this is just how much stuff the nation owns divided by how much it gets per year. The link to inequality is now clear: the larger β is, the more relevant accumulated wealth is compared to the flow of income. When β is higher, inequality increases because those who own the most wealth are proportionally better off than those who own less. Note that currently, β is between 5-6% in most countries, including the US. This means that the total value of all accumulated wealth in most countries is worth about five or six times as much as the total income for a given year. On a micro scale, this means that if my income is $40,000/year, all of my assets combined are worth about $200,000.

So Piketty's argument continues when he argues that growth is going to slow, savings are going to increase, and returns on higher amounts of savings will be higher. This will drive β higher. Growth of the economy, he argues, has been higher for the past century than it historically has and should be. It should hover at around 1% per year, he predicts. Right now, it is about 2.4% per year. As this number decreases, β will multiply. As savings increase and growth decreases due to population plateau and limits of technology, as well as the general trend that as countries develop the amount they grow by plateaus, we can see that the relative importance of accumulated wealth will increase compared with the importance of income. So those who have money will be able to get more of it more quickly.

Piketty prescribes a few solutions to his ominous prediction. First, he argues that a wealth tax on capital itself would reduce inequality. Because capital inequality is greater than income inequality, a tax on capital would help redistribute that wealth. Interestingly, Piketty's final prescriptions to unequal wealth distribution involve international cooperation. He proposes a 2% international tax on wealth because that would about reduce it's rate of return to the rate of growth and a progressive income tax (that could reach about 80%) would cut away at the inequality of income.       Of course this could lead to a self-fulfilling prophesy, because increasing taxes, at least on the generation of income, reduces the size of growth which could in turn lead to more inequality. If anything, the 2% tax on already accumulated wealth would be a more viable option that is less likely to cause the problem it is trying to fix.

Of course, there are objections to his theories. The first objection is that growth will continue to increase and/or that the government should encourage growth instead of taxing wealth. In essence this argument holds that g either will continue to grow at a normal rate or that the government should focus on stimulating g instead of reducing r. This objection stems from various predictions about the size of the world population throughout the next century. If the population increases, we can be sure that growth will increase too. But, if, as Piketty claims, the population will stagnate, then growth will decrease. Piketty also does not discuss the possibility of advances in technology that can increase growth. To address the second point, even if it is the case that growth will decrease, perhaps the government should encourage growth. This could involve stimulus packages, but also decreasing interest rates on borrowing.

The final objection to Piketty is actually one raised by Professor Richard Burkhauser, here, at Cornell University. He argues that inequality as Piketty sees it is increasing, but that if one adjusts for various government programs and other contingencies, the middle class has actually done rather well. Burkhauser notes that Piketty uses pre-tax, pre-transfer data on the tax unit to measure growth for the middle class. But this only captures one dimension of wealth. Burkhauser knows this and presents a new figure for middle class growth between 1979 and 2007, 36.7%. This is the post-tax, post-transfer + Health Insurance data for size-adjusted households, as opposed to just individuals in tax units.. This means that since 1979, after we account for the effect of transfers of wealth and the value of government provided health insurance, the wealth available to the middle class increased 36.7%. Burkhauser does not think Piketty misrepresented the facts, just that the facts Piketty presented do not tell the whole story.

On the whole, Burkhauser and Piketty should not be seen as operating on competing ideologies, but instead should be seen as bringing forth different perspectives. Piketty accurately characterizes the problems of inequality and how it is inherent to capitalism, but Burkhauser also adds invaluable information, namely that inequality can be and truly has been mitigated by the government in the past few decades. Perhaps, as Burkhauser suggests, the United States can take a deep breath of relief.  However, one thing is for sure: Piketty has brought up an aspect of our society that must be addressed. Inequality, if it is the dire problem that Piketty describes, really needs to be taken seriously.﻿