Seeing is Believing: The Oculus Rift and “The Ruture of Virtual Entertainment 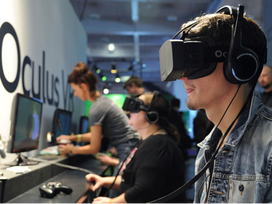 One of the most anticipated new technologies of the decade both by consumers, developers and scientists alike will be the Oculus Rift VR glasses. Virtual reality is the digital production, of an immersive and captivating audiovisual illusion, a stimulation of the human visual system. VR has been fiddled with as a concept by scientists dating back to the mid 1960’s. The Oculus Rift is a virtual reality (VR) headset for desktop PCs that will be made available at
an affordable consumer price, starting on March 28, 2016.  In the past, VR accessibility was severely limited to consumers as it was itself was below consumer quality standards. Even at such low standards, VR access costs tens of thousands of dollars per unit. On the outside, the Oculus Rift is minimalistic in design- not too extravagant and over-laden with features. It looks

like a coal-black box, roughly the size of a brick that has the appearance of giant, oversized ski goggles when put on the face. When the device is put on, there are various cords that run from the back of his head to the back of a computer. It looked futuristic, but still rudimentary. The Rift’s creator Palmer Luckey was a 17 year old teen when he constructed the prototype in his parents’ garage, in Long Beach, California back in 2011. He took the product to the crowd- funding platform Kickstarter, where he raised an astonishing $2.4 million. The product’s explosion on the public consciousness (with no actual tangible product being released yet) caught the attention of Silicon Valley. So in March 2014, Facebook spent $2 billion to buy Oculus VR and the rights to the virtual reality wearables product. It’s been in the research and development phase since then, until the release of the product in March 2016 for a retail price of
$599.99.  The implications of the Oculus VR’s impact on the video game industry is astonishing. Gamers will truly be able to be experiences four-dimensional, immersive gameplay that has
never been experienced before. The technology follows the real-time movement of your head in real time. You can almost believe you are fully there. It’s going to interesting to observe what policy will be enacted in the regulation and use of VR devices by our policymakers, especially in regards to minors, teens and individuals with mental health issues – demographics that are susceptible to negative effects from VR use, with the cognitive dissonance and overwhelming experience that VR brings to the user. Policymakers should be tenacious and prudent when enacting such legislation, so as to balance individual’s freedom of choice and desires in utilizing VR technology for entertainment and personal use, with the overall welfare and economic, social wellbeing of society.

But outside of the video game industry, the Rift has the potential to fundamentally change how humans live, interact, work and entertain themselves, and each other. Imagine putting on the goggles, but instead of sitting in a living room you’re rappelling into an active volcano, or trudging the snowy, windy ravines of the Himalayas. What if the wearer can take a trip to Mars? What if a wearer is incapacitated and dying- and wishes to walk the sands of a beach one last time on their deathbed? This is the real promise of virtual reality: the revitalization of the human sense of adventure. Virtual reality makes possible explorations humans never actually every thought were even feasible in our lifetime. This will be one of the most exciting technological changes that will herald this century.