Sexual Assault on Campus: A Call for Accountability
By Elizabeth Clarke 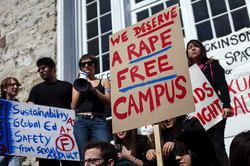 Columbia student Emma Sulkowizc first made headlines in 2014 with her senior visual arts thesis entitled “Carry That Weight.” Her message is simple; until Columbia expels Paul Nungesser, a fellow student whom Sulkowizc has accused of sexual assault, she is going to carry a mattress around campus. Though Columbia has already tried Sulkowizc’s case and found her assailant non-guilty, she argues that the administrative process was inefficient and insensitive.

This story is only one of many college rape cases that have garnered huge media attention over the past year. A Rolling Stone article depicting a gruesome gang rape at a University of Virginia fraternity shocked the nation. Weeks later, it became clear that most of the story was falsified. Then there was the Vanderbilt case in which two former football players were convicted of brutally assaulting an unconscious woman. They were both charged with aggravated rape, attempted aggravated rape, and aggravated sexual battery. Both men face decades in prison.

Though the specifics of these stories differ, they all bring forth important questions. What is it about college culture that facilitates these crimes? How do schools best navigate the often blurred lines between innocent and guilty, truth and word-of-mouth? And even when the facts are clear, are administrations equipped to handle such crises?

One common argument blames “college rape culture” and the ubiquity of alcohol on campus. In the Vanderbilt case – in which multiple men raped an unconscious woman, took pictures to send to friends, and then left her motionless in the hallway – the defense’s argument revolved around the culture of binge drinking and casual sex. “I was just drunk out of my mind,” defendant Corey Batey argued, “this is something I would never do in my right mind.” Though the jury in this case ultimately decided on a guilty verdict, it nonetheless highlights the danger of blaming brutality on college drinking culture. Overconsumption of alcohol should never be an excuse for attacking someone, and a culture of casual sex does not equate to a culture of sexual assault.

In a recent New York Times article, journalist Judith Shulevitz describes faulty government policy as the major cause of mishandled cases. She argues that the widespread fear of government sanctions leads to overcorrection on the school’s part, which sometimes results in complete disregard for the rights of the accused. Shulevitz ultimately calls for stronger reliance on law enforcement rather than school administrations. Though Shulevitz correctly identifies a need for improvement – and the necessary regard for both victim and defendant rights – she fails to acknowledge that many victims feel more comfortable speaking with administrators rather than police, and removing that option could lead to more unreported cases.

In addition, Shulevitz’s account of government policy gives little credit to the forward-thinking legislation that currently exits. Title IX protections are extensive, yet they remain largely unknown by the public. For example, in cases of sexual violence, administrators are prohibited from encouraging mediation rather than a formal hearing. The school must also take any action necessary to make a complainant as comfortable as possible after a reported incident, often through the enforcement of no-contact policies between the two parties. Students are further protected by the Clery Act, which requires, among many other things, that both sides are informed of their rights during a criminal hearing process.  It also outlines an administrative responsibility to facilitate the process according to the desires of the complainant.

In my opinion, issues do not arise from a lack of good policy, but rather from a lack of accountability. Many students are not aware of their rights, despite policy that requires the disclosure of such information. Furthermore, schools face rather minimal penalties for failing to comply with the law.

New York Senator Kirsten Gillibrand and others are trying to combat such issues of accountability with new legislation introduced in the Senate last week. The newest version of the Campus Accountability and Safety Act (CASA) mandates that schools distribute anonymous sexual assault surveys and publish results online. CASA requires that administrations disclose the number of reported assaults and disciplinary hearings, as well as the outcomes of trials. Perhaps most importantly, CASA institutes a direct financial penalty for Title IX violations. Under current legislation, schools can lose federal funding but cannot receive direct fines. The new legislation also increases the fine for Clery Act violations by more than four times the current amount.

The approval of CASA will be a milestone in increasing school accountability for sexual assault cases. Yet as Obama’s new sexual assault campaign – entitled “It’s On Us”” – clearly states, ending sexual violence on campus goes far beyond these policies. We all have to educate ourselves on our rights. We all have to throw our support behind policy that raises awareness, simplifies the system, and increases accountability. Finally, we all must recognize the moral responsibility of every person that sets foot on a college campus. Whether its intervening in an uncomfortable situation or helping a friend in the aftermath of tragedy, Ms. Sulkowizc shouldn’t be left to carry that mattress alone.