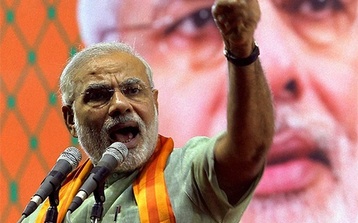 As the world’s largest democracy heads to the polls this month, it seems a foregone conclusion that the opposition Bharatiya Janata Party (BJP) and its leader Narendra Modi will come out victorious and form the next government in New Delhi.  The BJP, known for its fervent Hindu nationalist ideology, is poised to end a ten-year absence from power, garnering support from wide swaths of Indian society – from the poor laborer, allured by the promise of better jobs, to big business, encouraged by the party’s economic liberalization policies (Burke).  Modi, the iron-fisted 63-year-old former Chief Minister (CM) of Gujarat in western India, got his start in politics with a grassroots Hindu community organization and gained infamy as CM in 2002 for failing to stop, and even seemingly encouraging, widespread rioting and sectarian violence that led to over a thousand, mostly Muslim deaths.  Indeed, there are many who worry about the integrity of India’s founding ideal of secular, liberal democracy in the face of the jingoistic, sometimes authoritarian Modi (Burke).  The BJP’s impending election will undoubtedly play a significant role in changing the face of the country domestically, but will also shift India’s regional foreign relations, especially with rival Pakistan.  Modi can be expected to adopt an aggressive stance in Indo-Pak relations, a policy that could see ties between the nuclear powers deteriorate to the brink of war.

The BJP’s planned revision of India’s nuclear doctrine would send a clear signal to Pakistan that Modi is willing to adopt a more offensive foreign policy.  The party pledged in its election manifesto to revise India’s professed “no-first-use” policy for nuclear weapons, a policy Pakistan never adopted (“BJP puts no-first-use nuclear policy in doubt”).  In the manifesto, the incumbent Indian National Congress party is criticized for frittering away the strategic gains acquired in 1998, under the leadership of Atal Bihari Vajpayee and the BJP (Lasseter).  Modi hopes to reclaim these strategic advantages and indirectly use them in his relations with Pakistan.  While the doctrine of mutually assured destruction reduces the risk of total war, a more aggressive nuclear policy foreshadows the new government’s willingness to adopt a similarly assertive line on other issues, such as cross-border insurgency and Kashmiri autonomy.

On the issue of Kashmir, the most prominent fault line for conflict between the two countries, Modi appears willing to clash with Pakistan.  During a rally in December, Modi pledged to reignite a national debate on Article 370, a controversial constitutional provision that grants Kashmir, India’s only Muslim-majority region, a degree of autonomy (Mashru).  Unilateral steps to alter the Kashmiri political status quo are cited to be potentially damaging to Indo-Pak relations, stoking fears especially in the Pakistani military (Panda).  These fears could escalate to war in Kashmir, only fifteen years after the last war fought, under the last BJP government to hold power in India, in the region.

Repealing Article 370 would also neuter the political concessions New Delhi has given to quell the violent insurgency in Kashmir.  A region rife with ethnic rivalries, terrorism, and a violent separatist movement, Article 370 played an important accommodative role for the troubled state (Mashru).  A renewed insurgency in Kashmir as a result of the repulsion of Article 370 would only incite further tensions in Indo-Pak relations.  Pakistan has long been known to harbor, sometimes even equip and train, violent Kashmiri insurgents.  Top Modi aides have been quoted saying that he intends to be “more robust” with Pakistan on attacks by militants based in the country (Lasseter).  Article 370’s repulsion would create a situation warranting a robust, heavy-handed response from Modi.

The tough stance Narendra Modi intends to adopt with regard to Pakistan would set the stage for an escalation of tension and conflict between India and its archrival.  By following the hardline, nationalist views commonly associated with his party, Modi could push the two nuclear powers to the brink of war.  The first hundred days of Modi and the BJP’s government will reveal how much of the fiery, election-year rhetoric is just that, and how much is actionable and potentially dangerous.