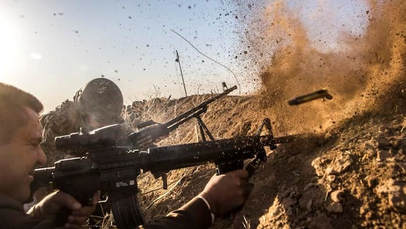 The ongoing battle for Mosul represents an amalgam of symbolic and strategic interests that define and complicate the fight for its liberation from ISIS rule.

The Iraqi army and its allies are engaged in a grueling campaign to wrest back control of the city of Mosul from Islamic State rule. The campaign brings together a veritable laundry list of actors—Iraqi army, Kurdish Peshmerga, and Shia paramilitary, in addition American, British, French, and Turkish special forces—in the most complex military operation in the country since the American invasion in 2003.

Explained below are several symbolic and strategic considerations that define and complicate the battle for Mosul:

1.) A symbol for the caliphate: Mosul is Iraq’s second largest city and dwarfs even Raqqa—ISIS’s capital in Syria—as the centerpiece of the Islamic State’s territorial holdings. Mosul represents a significant victory for ISIS because the city was acquired after defeating U.S.-backed Iraqi forces. For this reason, Abu Bakr al-Baghdadi, ISIS’s leader, delivered his first public speech from behind the pulpit of Mosul’s Great Mosque, where he proclaimed himself caliph. However, Mosul’s symbolic importance extends into antiquity. Since 700 BCE, whoever ruled the city—be they Assyrians, Babylonians, Ottomans, or the British—traditionally dominated the region. Moreover, its loss would deprive ISIS of Mosul’s oil fields and tax base, and cut off major Iraqi supply routes to Raqqa.
​
2.) Aleppo and Mosul: Aleppo and Mosul share noticeable commonalities—deep histories, ethnic and religious heterogeneity, and mercantile character. Moreover, the two cities represent a larger conflict between America and Russia—the countries directing operations in Mosul and Aleppo, respectively. The U.S. will contrast a quick, decisive victory in Mosul against Russia’s “quagmire” of an assault on Aleppo. A similarly protracted fight in Mosul, however, will draw unflattering comparisons.

3.) Turkey, a dangerous ally: Turkey has proven to be an unreliable, if hazardous, ally in the fight against ISIS, and its entrance into the Iraqi conflict further complicates the strategic equation. The U.S. assembled coalition deliberately excludes Iraqi Shiite militias, a fighting force besmirched by a record of abuses against Sunnis, to avoid alienating Mosul’s predominantly Sunni inhabitants. Now, the specter of Turkey’s participation has renewed Shiite militias’ threats to enter battle in Mosul. Moreover, the Turkish government has displayed little respect for Iraqi sovereignty by stationing 600 to 800 troops at a base in Bashiqa in northern Iraq. Turkey’s president, Recep Tayyip Erdogan, did little to allay fears of Turkish expansionism he when suggested that he wished to redraw his country’s borders. Finally, Turkey harbors acrimonious sentiments against the Kurds, a key coalition force that resides in the Turkish-Iraqi border region. Ankara’s real priority is to suppress the Kurdish separatists, who have engaged in a decades-long rebellion against Turkey.

5.) Iraqi unity: The question of national unity is a perennial one for Iraq, a country whose inhabitants lack a shared history, religion, and language. The Kurds, Sunnis, and Shias—the minority groups that comprise the Iraq—are wary of each other, and understandably so. For decades, Saddam Hussein’s Ba’athist regime, a Sunni institution, maintained national cohesion through brute force, going as far as to launch a genocidal war against the Kurds. Today, however, an invigorated Iraqi army enters Mosul following a string of smaller victories against ISIS. The conflict has borne witness to Kurds, Sunnis, and Shias fighting alongside one another with common purpose. Hopefully, this will inspire a shared sense of national destiny that will act as a unifying political force.

6.) ISIS, unvanquished: In Mosul, ISIS will likely face defeat, but certainly not demise. To be sure, the loss will deal a punishing body blow. However, in Taliban fashion, ISIS operatives will likely melt into the shadows until launching another insurgency in Iraq.

​The battle for Mosul represents the single most important offensive against ISIS to date. If all goes as planned, the U.S.-led coalition will have dislodged the group from its most important Iraqi base and crippled its revenue-generating capacity. At the same time, Washington should be acutely wary of the amalgam of competing interests that threatens to undermine victory.