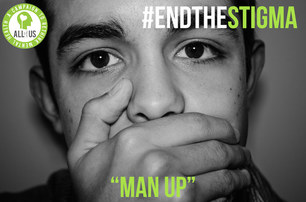 According to the CDC's projections, by 2020 mental and substance-abuse disorders will surpass all physical diseases worldwide as major causes of disability. What’s more, research shows that cardiovascular disease, diabetes, obesity, and other chronic diseases are associated with mental illness, and that treatment of mental illness can reduce the effect of chronic diseases. According to Copeland’s findings, by age 21 over 60% of population has experienced a psychiatric disorder, yet only 41% of those individuals seek help for their symptoms.

Are we focusing our public health resources in the right place? Why is it so much harder to walk into a counselor’s office than a gynecologist’s?

A better understanding of factors infactors that influence  avoiding help-seeking is critical for counselors, mental health professionals, and policy makers to design and implement interventions and education to reduce barriers to seeking help.
Recent research has described five prominent barriers to seeking treatment.
1. Social Stigma - The fear that others will judge a person negatively if he or she sought help for a problem.
2. Treatment Fears- Apprehension surrounding how the counselor will treat the individual, what the counselor will think of the individual, and fear of being coerced. Interestingly, several studies found that those who do not use mental health services have the highest level of treatment fears.
3. Fear of experiencing strong and/or painful emotions
4. Anticipated usefulness and  or lack of counseling; risk of feeling misunderstood, judged, or even ignored by the practitioner. Many people see counseling as a last resort, despite evidence that seeking counseling services is effective in preventing worsening of mental illness down the road.
5. Self-Disclosure - Reported that people who were not comfortable talking about personal issues with a professional were five times less likely to seek help.

Social norms also exert a powerful influence on help-seeking. Many people believe that seeking mental health resources will be perceived as admitting that you cannot deal with a problem on your own. As a result, many will decide not to seek help in order to maintain a positive self-image. Conversely, studies have shown that people who know others who had sought therapy have a positive attitude toward therapy and are more willing to seek counseling themselves. People were also more likely to seek help if they believed that important people in their lives would approve of such an decision.

Sex and gender also influence help-seeking. Males are found to be more likely than women to get treatment for severe psychiatric diagnoses and to rate their level of distress as extreme or severe. Men also consistently have higher substance-abuse disorders than women. One study showed that objective participants were more willing to refer a hypothetical woman to mental health treatment than a hypothetical man. Why do these factors exert so much influence on help-seeking for mental illness? Why are they more pronounced in men? What can we do about them ?

Research examining avoidance factors is new, and many questions remain, particularly with respect to gender disparities. We do know, however, that avoidance factors become increasingly stronger the closer a person gets to needing help. Research also shows that efforts to increase public awareness could be more efficient when individuals seeking help have information that addresses their anticipated concerns.

Researchers are now learning that symptoms of mental illness often manifest themselves differently in men than in women. Take depression: most people (physicians included) would expect someone suffering with depression to have an affect of dejection and withdrawal, yet men who are depressed often appear angry or irritable. In regards to eating disorders, men with body image issues may also become obsessed with their muscles, skin, genitals, and nose, or hair— areas of the body that aren't typically the focus of women with body image issues.

So what can we do?