Students' Trip to Auschwitz Raises Question: Should Palestinians Learn about the Holocaust? 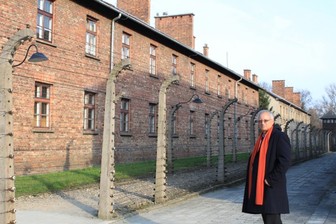 In the midst of souring U.S.-brokered peace talks between Israel and Palestine, the vitriolic response to a Palestinian professor’s decision last month to bring his students to the Auschwitz concentration camp highlighted the continued divide between the two peoples and raised an important question: should Palestinian schools teach their students about the Holocaust?

As part of a project to teach empathy and tolerance, Mohammed S. Dajani, a professor at al-Quds University in Jerusalem, took 27 Palestinian college students to Auschwitz concentration camp in Poland. At the same time, the program – sponsored by the German Research Foundation (not by Jewish organizations, as some believed) – paid for Israeli university students to visit Dheisheh refugee camp to hear Palestinians’ stories.

The trip to Auschwitz got an explosive response from the Palestinian community, with some TV analysts, newspaper columnists and researchers calling the visit “treason,” accusing Dajani of “brainwashing” Palestinian youth, and asking, “Why go to Poland? Why not teach our young people about the Nakba (the catastrophe of 1948)?”

According to Dajani, who in 2007 founded Wasatia, a group dedicated to moderate Islam and moderate politics, these comments were representative of the fact that many Palestinians believe the Holocaust is exaggerated, while others believe Israelis use it to justify their seizure of Palestinian lands.

From the perspective of improving Israeli-Palestinian relations and peace talks, it is important that both parties learn about the backgrounds of the opposition, coming to understand the historical legacies that have shaped their national identities. Palestinians aren’t about to convince Israelis that the Holocaust didn’t happen, and what’s more, they weaken any reasonable arguments they make when supplementing them with claims that a mass genocide simply didn’t occur. Similarly, Israelis cannot ignore the impact of the Nakba on the Palestinian psyche.

Dajani, a “proud Palestinian nationalist” who supports a two-state solution to the conflict, regards the Israelis as occupiers. But, importantly, “he thinks if you want to engage the Israelis, you have to understand where they’re coming from.”

But Dajani himself underscored the importance of teaching Palestinian students about the Holocaust – for several reasons that have nothing to with Jews – in a New York Times op-ed he co-authored on the same issue. In it, he noted that the lessons of the Holocaust are universal, as they provide a point of comparison for all other genocides since then; without discussing the Holocaust, he said, “discussing genocide is meaningless.”

To be fair, reports of the most incisive remarks about Dajani’s trip came from the “comments” sections of articles about the trip, which is likely an unfair representation of the average Palestinian’s opinion. Still, the comments highlighted the need for more education – on both sides – and in particular showed the value of trips like Dajani’s. One of Dajani’s students, quoted in a Washington Post article after visiting Auschwitz, said that while the visit “did not diminish his desire for a Palestinian state,” it “changed him.”

That is the goal of trips like Dajani’s and their Israeli counterparts: they aim not to “brainwash” their students, but to promote tolerance and empathy. Before there can be any real trust between the two sides of this debate, there has to be understanding. For what problems can possibly be solved by ignorance?