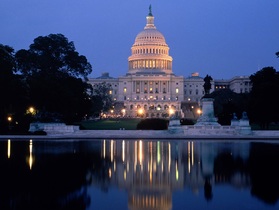 ​Virtual disenfranchisement exists on several levels in the United States, but legal counterparts exist for only a few federal subjects. Aside from the overseas U.S. territories, the stipulation of non-voting members of Congress also extends to Washington D.C. Much like Puerto Rico, Washington D.C. floats in a political purgatory, but the inhibitions on governance in Washington D.C. are remarkably harsher than territories with no right to vote for the president.
The current limitations on D.C. are largely an obsolete remnant from the past. The foundation of the District of Columbia was to maintain a federal government that would not require reliance on any state. The logic was sound at the time, as citizens rueful of the new federal government had started several rebellions. The District of Columbia was represented by its votes in Virginia and Maryland from 1791 until 1801, when Congress passed the Organic Acts, classifying D.C. as a separate entity and preventing its residents from voting in Virginia or Maryland.

The issue behind Washington D.C.’s congressional right to vote has been debated fiercely, but the concessions given to the people of Washington have been anemic at best. D.C. was given the right to send delegates to Congress as late as 1961 with the passage of  the 23rd amendment. Yet, it was only given the right to send no more delegates than the least populated state. This effectively chained D.C.’s proportional vote in presidential elections, cannot have more Electoral College delegates than the number of delegates it possesses in Congress.  At this point, D.C. is only entitled to a single delegate despite the fact that Washington D.C. currently has more people than either Wyoming and Vermont. In fact, D.C. was home to more people than nearly 14 states during the 1950s.

The degree of representative inequality D.C. experiences is not the only inhibitor for D.C.’s political representation. Unlike territories that have home rule to a certain extent, Washington D.C.’s affairs requires overview by Congress. D.C. also acquires financial resources from the Congress in order to run its operations. Several laws that have been bogged down by representatives from other states actively imposing their ideology on D.C. with little knowledge of what the city needs. The legalization of marijuana last year was nearly voided due to “riders,” add-ons to D.C. laws that usually retract funding from city programs, which prohibited the city from using federal or state funds from carrying out the act. The decriminalization of recreational cannabis is just one of the many programs that riders were added onto in order to neuter their effective execution. Some of these initiatives were to prevent disease epidemics and even to allow abortions for poorer women in the District.
​
Arguments vary on the reasons why D.C. is deprived of a proper vote. Delegate Eleanor Holmes Norton of D.C. claims that Republicans are bogging down D.C. from proper representation due to its heavily democratic political orientation. Other sources suggest that D.C.’s largely African American population has insinuated many American politicians to block full franchise for the district. Regardless, this political game that Congress plays with D.C. is distressing to say the least. D.C.’s population exceeds that of Wyoming and Vermont, and its people provide the highest tax base per person in the country. Yet, its right to decide on its future, whether to go to war or to raise taxes is omitted from any congressional session. This is a great irony to say the least that the Capital of the United States is the one place in the land of the free that cannot speak for itself.