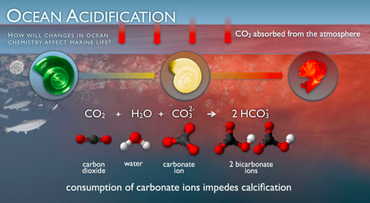 By: Jineet Patel, 2/24/2016
​
​Global climate change is the first thing that comes to mind when environmental issues are brought up. Human activity rapidly changed after the course of the Industrial Revolution; as countries became more industrialized, fossil fuels were used as cheap and efficient methods to harness electricity and other usable forms of energy. Entire economies changed with the transformation of industry, representing one of the most impactful changes in the last few centuries. Consistent usage of fossil fuels since then has been the culprit for releasing massive amounts of carbon dioxide into the atmosphere. The unnatural increase of carbon dioxide and other ‘greenhouse gasses’ in the atmosphere is responsible for the phenomena known as global climate change. However, what is often forgotten is ocean acidification. In the last decade, scientists have confirmed that anthropogenic rise in carbon dioxide is not only responsible for tremendous changes in our atmosphere but also for a significant decrease in pH of the ocean.

What is ocean acidification? When immense amounts of carbon dioxide are released into the atmosphere, not all of it remains there. In fact, over 30% of that carbon dioxide is dissolved into the bodies of water around the world. Rather than remaining in the ocean as CO2, chemical reactions involving water and the dissolved gas, form carbonic acid (H2CO3), which then tends to react with water again to release H+ ions ultimately decreasing pH. Until recently, scientists speculated that the ocean contained enough minerals that would buffer, essentially neutralize, these reactions and prevent large-scale changes in pH. However, since the turn of the century it is now known that too much carbon dioxide is being absorbed for any natural process to handle. Since the Industrial Revolution, the ocean’s pH has fallen by 0.1 pH units. Although that doesn’t seem significant, the logarithmic nature of the scale means that ocean water has become 30% more acidic since then.

The impacts of ocean acidification are far-reaching and in most cases, permanent. The most significant impact is biological where many species will be affected, potentially altering ecosystems as well. The decrease in pH will have the greatest effect on oceanic calcifying organisms such as mollusks. A more acidic environment makes it more difficult to produce shells, which then leads to higher death rates by predators. Corals build their homes from calcium carbonate and would also be significantly affected. Entire coral reefs erode in acidic waters and the chemical changes associated with acidification makes developing reefs much more difficult. Increasing acidity may also have effects on species of fish that would have to expend more energy to maintain at equilibrium with its surroundings, energy that could have been used to find food or avoid predators. All in all, entire food webs are affected by ocean acidification, which ultimately affects human industry. Over a billion people around the world depend on the ocean for food, with shellfish being a common source of protein. The decline of commercial fisheries is a real threat caused by ocean acidification that would only get worse with current rates of carbon dioxide emissions.

So what needs to happen to counter ocean acidification? The effort to combat ocean acidification needs to be a joint effort between policy makers and government leaders as well as scientists that are at the front of this issue. The first step is to encourage more research into this phenomenon by increasing grants and funds for researchers. As mentioned earlier, ocean acidification has really only been brought up in the last decade and the biological and economic effects are still not fully known. Concrete research would provide evidence for policy makers and government leaders so they can enact the appropriate actions. It is important to realize that ocean acidification is coupled with global warming as direct effects of man-made carbon emissions. In 2013, carbon dioxide passed 400 parts per million in the atmosphere which is higher than any time in the last million years. The rate at which carbon dioxide is being added to the environment is affecting both atmospheric as well as oceanic conditions. At this rate, neither the atmosphere nor the ocean is provided a chance to recover. The only way to stop ocean acidification and potentially reverse it is to make large-scale changes to drastically alter our carbon emissions.