The Five Great Perils of Brexit ​ 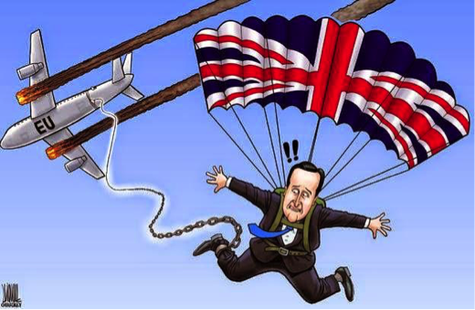 
​
United Kingdom (U.K.) Prime Minister David Cameron has announced June 23rd as the date of an in-out popular referendum on the U.K.’s European Union (E.U.) membership. A vote in favor of British withdrawal from the E.U., sometimes referred to as “Brexit,” would have enormously treacherous implications for the future of Europe and the U.K.’s four constituent countries.
​

​
1. The Scottish Question: The Scottish independence referendum of 2014 yielded a popular vote against Scotland’s exit from the U.K., but its ruling pro-independence, pro-E.U. party warns that Brexit would ignite a constitutional crisis and lead to a fresh vote in favor of Scottish independence. In other words, Scotland might leave the U.K. so that it may retain its membership in the E.U., an institution that remains widely popular among Scots but is largely distrusted by their southern English neighbors. By allowing a vote on Brexit, Prime Minister David Cameron has opened the door to the death of the centuries-old political union among England, Scotland, Wales and Northern Ireland.

2. Human Rights: If Brexit succeeds, the U.K. will be released from E.U. obligations that are unpopular with right-wing U.K. voters. Conservatives have already pledged to immediately repeal the Human Rights Act and sever Britain’s ties to the European Convention of Human Rights upon Brexit. The U.K. would no longer be subject to Europe’s legally binding human rights protocols, striking a serious blow to a supranational legal framework that has preserved peace and cooperation among European nations for decades.

3. The Irish Question: The Human Rights Act and the European Convention of Human Rights underpin the 1998 Good Friday Agreement that ended over three decades of armed sectarian hostilities in the British exclave of Northern Ireland. The Irish Taoiseach (Prime Minister) Enda Kenny observed that the U.K.’s repudiation of these key peacekeeping institutions would equate to a British disavowal of the Northern Ireland peace process itself. Brexit would also pave the way for the remilitarization of the border between Northern Ireland and the Republic of Ireland, undermining cross-border cooperation and reigniting a bitter, and perhaps bloody, debate over the future of Northern Ireland.

4. The Looming Danger of Neo-Fascism: If the U.K. votes in favor of withdrawal, a newly empowered Conservative government would likely toughen immigration laws and strike down social welfare and labor protections for non-citizen residents — draconian policies that current E.U. agreements forbid. It is no surprise that the far-right, British nationalist United Kingdom Independence Party (UKIP) campaigns for Brexit and the immediate cancellation of British participation in all E.U. treaties.

5. An Ejection Crisis: If Britain and the E.U. fail to negotiate a withdrawal agreement within two years of an affirmative Brexit vote, Britain will be automatically ejected from the E.U. With key areas such as trade and defense left unnegotiated, a forced Brexit would send shockwaves throughout Europe and catalyze an unprecedented geopolitical crisis.

​
Post-script: Though Brexit’s proponents frame the U.K.’s withdrawal from the E.U. as a matter of parliamentary sovereignty and self-determination, they gloss over its potentially cataclysmic consequences for the people of England, Scotland, Wales and Northern Ireland. As the Brexit vote approaches, it is essential that people of conscience say with resounding certainty: “NO to Brexit, YES to the E.U.!”