The Government Shutdown: Effects on the U.S. Market and the Global Economy 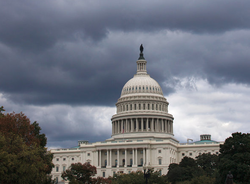 At the end of every government fiscal year on September 30, Congress passes a new spending bill. However, this year the House Republicans stipulated that the new spending bill must include provisions to defund the Affordable Care Act. The usual political gridlock on Capitol Hill escalated as both Republicans and Democrats were unwilling to compromise, resulting in the first U.S. government shutdown in 17 years.

While Washington was in turmoil, Wall Street maintained stability. On Tuesday, the Dow Jones Industrial Average was up 49.2 points, the S&P 500 gained 10.7 points, and the Nasdaq Composite increased 34 points. Most professional investors have not blinked an eye in the face of the government shutdown. Some are optimistic, explaining that the crisis could even reduce the U.S. Federal Reserve’s quantitative easing process. Quantitative easing is simply expansionary monetary policy in which the Fed purchases bonds, lowering interest rates and increasing the money supply. But the crisis could counteract the quantitative easing process, driving up interest rates and encouraging financial risk-taking. Even as Obama met with the CEOs of top U.S. financial firms, such as Goldman Sachs and J.P. Morgan, business leaders are calm.

However, even though the immediate economic effects of the shutdown are limited, the bull market cannot continue. According to Bloomberg Businessweek, stock trading volumes are at their lowest level in five years and the margin debt is still high. Plus, with the debt ceiling looming on October 17, the government shutdown could have considerable effects on the overall economy. For instance, Philippine Finance Secretary Cesar Purisima explained that the U.S. shutdown is “highly unfortunate for the rest of the world, as even countries like the Philippines are taken on a wild economic ride because the political game of chicken in Washington.” As Barack Obama explicitly stated, “The longer this shutdown continues, the worse the effects will be.” Brian Kessler, an economist with Moody’s Analytics, explained that the overall economic effect could be at least 10 times the sum of the lost wages of the 800,000 displaced government workers, while a week-long shutdown would reduce the U.S. GDP by 0.3%. If the government shutdown lasts for a month, the economy could lose $55 billion.

Is the U.S. market and overall global economy in danger? The state of the economy depends on the length of the government shutdown. The CBOE Volatility Index, which measures consumer confidence, increased by 36% in the past two weeks. Clearly, consumer confidence is wavering in light of the recent political activities, foreshadowing potentially foreboding economic results. In order to avoid economic immobility, investors should be aware of the detrimental impact of the governmental shutdown but still maintain confident investing behavior. Only with high consumption and high investment can citizens pump money into the economy and drive up Gross Domestic Product. If investor confidence decreases and the dollar depreciates, the flow of money into the U.S. will lower drastically, resulting in a stagnant economy that mirrors Washington’s political deadlock.