The USDA's Conservation Programs: The Nonsensical Shutdown of a Bipartisan Bill 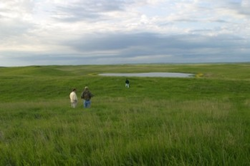 The United States Department of Agriculture is one of the few sections of government that is rarely criticized in Congress, but that didn’t make it exempt from the government shutdown. Until further notice, the department can no longer fulfill its duties to farmers or farmland stakeholders. The USDA doesn’t even have a functioning website anymore. Most members of Congress agree that the USDA’s functions are critical, and are closely interlocked with the economy and the wellbeing of millions of Americans. These functions include not only the regulation of food subsidies, but also running a number of derivative organizations, such as the US Forest Service and Natural Resource Conservation Service. The shutdown has indefinitely suspended almost all of these activities, including a certain piece of law regarding conservation programs in the farm bill.


This piece of conservation law is almost universally bipartisan, and is part of the gigantic farm bill that funds so many USDA programs. $62 billion dollars is allocated to conservation in the farm bill, which funds programs such as the Conservation, Wetland and Grassland Reserve Programs, Conservation Stewardship Program, Environmental Quality Incentives Program, Chesapeake Bay Watershed Program, and Wildlife Habitat Incentive Program. The law, which officially expired on October 1st, is being shirked for renewal in Congress due to the huge nutritional assistance program that it is attached to, which has become politically controversial and thus been subjected to a Congressional stalemate. This is especially a shame because both parties have already agreed on some major changes that would occur to the farm bill conservation programs, which would include modest cuts to programs that weren’t doing well while streamlining other programs to allow them to function more efficiently. We will never see these improvements, however, unless the farm bill is put to a vote, which cannot happen in the current Congress as long as it still includes nutrition programs.

The beautiful part about conservation law in the farm bill is that it would usually be able to endure the expiration of the farm bill for long periods of time should such a political stalemate occur. This is because of the bipartisan support for short-term funding, long-term contracts for land already under conservation easement, and an Agricultural Appropriations Act, which has already extended many of these programs through fiscal year 2014. The current situation has overridden even these safeguards, however, because in a shutdown, the USDA cannot pay on its contracts or even provide support for its extended programs. This problem would pale in comparison, however, to what would happen if a new farm bill is not passed by next spring.


This situation would occur in the circumstance that the Democrats and Republicans act on their current impulse to work out a short term deal to fund the government and raise the debt ceiling, while working out their differences in the long term. This might not sound bad at first, but if this fight continues for another 3 months or more, then it will drastically drain the amount of time and political capital Congress has available to devote to other pieces of controversial legislation, such as the nutrition portion of the farm bill. The Democrats will not pass a farm bill separately from a nutrition program, and so if this fight continues into spring 2014 (even with a funded government) a number of bad things will happen. Agriculture in general will be crippled due to insufficient subsidy programs, and conservation programs in particular may be unable to renew enough conservation easement contracts to make up for those that had expired. In a law that spends $62 billion on conservation easements, and can enroll easements for as many as 30 years, a loss in opportunity to recruit new land could be death to conservation programs that are already having difficulties adjusting to crop prices.

The USDA is an organization that no one in Congress wants to admit to hurting, but further inaction could be a horrible barrier for the organization’s continued progress. Conservation and agricultural programs should be treated with the care and intelligence that we’ve come to expect from this nation’s lawmakers. Most importantly, though, Congress needs to admit that further legislative inaction, including a prolonged budget and debt fight, could unintentionally destroy one of the few things that they agree on.