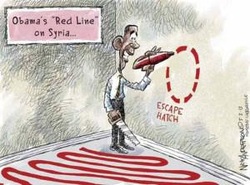 As the United Nations scrambles to secure a resolution that would rid Syria of its chemical weapons, the international community appears to be breathing a sigh of relief at a crisis averted. diplomatic scramble is now under way at the United Nations to secure a resolution to implement Putin and Obama’s deal to rid Syria of its chemical arsenal. Though the haste to act on promises of force seems to have died down, it is still reasonable to wonder what will happen if the deal falls through.an unreasonable deadline and weak Russian influence over Assad make the failure of a chemical weapons deal a likely scenario. (Given the optimistic deadline and questionable Russian influence over Assad, it is not a far stretch). Furthermore, President Obama’s promise that Assad’s use of chemical weapons would cross a “red line” that would incite American intervention has done little to improve the situation in Syria. Current US Syria policy has been counterproductive at best, supporting extreme and moderate rebels alike, thereby undermining its credibility as a leader and an ally. The US government must differentiate between moderate and al-Qaeda factions of Assad’s opposition, and lead an aggressive, multinational information campaign to ensure that its assistance to the opposition does not go awry. Already, the US has been arming the Syrian opposition and has made plans to continue training and supplying the Free Syrian Army (FSA). However, this approach has drawn strong criticisms for fails ing to differentiate between the moderate factions of the opposition and its al-Qaeda factions. The US should certainly be wary of this, as undifferentiated support for the opposition could end up strengthening al-Nusra and al-Qaeda in Iraq (AQI), two parts components of al Qaeda active in Syria.

So far, President Obama’s policy towards Syria has done little to deter the marginalization of the moderate opposition. In fact, the Free Syrian Army now feels additional hostility towards the UN because it sees a resolution on chemical weapons as a betrayal. Syrian rebels saw Obama’s “red line” on chemical weapons as a promise for intervention, but the shape of the chemical weapons deal does nothing little to address the 100,000 Syrians killed by conventional means or the country’s growing refugee crisis.

President Obama promised the FSA that the US would intervene if Assad were to “cross a red line” and use chemical weapons within Syria. Obama failed to keep that promise by effectively delegating the decision to Congress – which probably would have sided with the American public and voted against him the use of force if the chance had arisen given the chance - and diminished the credibility of his threat to use force in the process.

As the US loses its credibility as an ally to the FSA, al-Nusra and AQI continue to strengthen their bases in Iraq, recruit foreign volunteers eager to conduct suicide missions, and spread their ruthlessly simple ideology depicting the Assad regime as nonbelievers and apostates because the regime is composed of Alawites backed by Shiite Iran. Al-Qaeda thrives on sectarian animosityhostility, so it seeks to turn the civil war into a sectarian conflict pitting Sunnis against Alawites and Christians.

One way to mitigate the danger of inadvertently helping al-Qaeda in Syria would beis to deploy an aggressive information campaign to expose its al Qaeda’s true nature and goals. Al-Qaeda in Syria portrays itself as a combination of Islamic holy warriors and freedom fighters. The United States and its partners should must work to expose al-Qaeda’s factions in Syria as terrorists. Providing more information about the groups, especially their leaders, would damage their credibility. The more information brought to lightis dispersed about these figures, the less they are likely to be seen as freedom fighters or and holy warriors. The US’ European partners and Arab allies (especially Jordan, which has strong intelligence capabilities) The United States' Arab allies, especially Jordan, which has excellent intelligence capabilities, should play a significant role in this campaign. So can Washington's European partners with expertise in the area. The US should additionally The Turkinclude Turkeys, Saudi Arabia s and Qataris, who are also arming the opposition, should also be included in the effort..

By diminishing al Qaeda’s influence in Syria, the United States would go a long way in protecting its security and ensuring that its assistance for the opposition does not go awry. Information will not fully solve the extremist problem in the Syrian opposition, but it is a large improvement on step away from unfulfilled promises of force and artificial red lines.