The Road to Recovery for Nigeria’s Farms – Post Conflict Agriculture 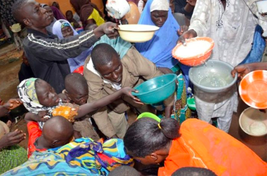 ​As the Boko Haram insurgency begins to dissipate from the northeastern states of Nigeria, agricultural production remains at a standstill. For a region that grows 50% of the nation’s staple crops of beans, wheat, and maize, the conflict left farming households abandoned for the past three growing seasons. Even though these farms function as small-scale subsistence properties, known for their poor soil quality, the absence of this portion of Nigeria’s food system increases reliance on foreign imports. Since the Boko Haram conflict began in 2009, 65% of northeastern farmers sought refuge in southern states near Lagos. Their fears were justified as insurgents pillaged farmland, controlled export routes, and planted land mines deep in the soil.

Although Boko Haram halted agricultural production and increased transportation costs, the insurgency is not the root cause of the issue. The insurgency does not only represent a conflict over scarce resources and a lack of economic opportunity for marginalized citizens, but the result of failed government institutions to protect farmers’ livelihoods. Before the conflict, the northeastern states of Adamawa and Borno experienced low production levels and high costs for necessary fertilizer inputs. The geographic isolation of northern farmers from the wealthier, southern purchasers and input suppliers makes marketing and access to improved seed varieties, banking systems, and government expenditures extremely difficult. These institutional barriers to improved growth provided an exploitable environment for Boko Haram to destroy agricultural production in the region.

Recently, the Food and Agriculture Organization of the UN (FAO) questioned the Nigerian government’s role in allowing a mismanaged and disconnected agriculture system to operate. As 250,000 civilians fled their homes and Nigeria took in 23% less Foreign Direct Investment, NGOs and foreign donors must rethink their strategies to support the region’s agriculture resiliency. On the ground, the situation for farmers becomes stressful as the diminished international support for fertilizers forces growers to increase crop prices. Before the conflict, a cowpea wholesaler from Adamawa could transport six hundred 100-kilogram bags of beans to Lagos each week. However, Boko Haram forced farmers to cut travel, limiting some deliveries to only 25 bags per week.

With recent low levels of conflict in Adamawa as more towns are recaptured by the Nigerian military, the FAO assesses that 45% of the state’s internally displaced persons wish to return home and rebuild their farms. This year, working with research groups and domestic NGOs, FAO will provide seed aid and farm supplies to these farmers. Handouts contain 20kg bags of maize,10kg bags of beans, and a 200 Naira allowance. Due to the recent rollout of the project, sufficient data on yields or consumption has not been collected. However, unlike food aid, seed aid provides a necessary, medium-term solution to food security and contributes to increased farm revenue.

Despite the FAO’s initiative, the success of seed handouts may rely on the complementary access to fertilizers, proper irrigation, and information on market and credit services. However, these necessities go beyond the work of a single agency and rely on effective government support. The other option for post-conflict support may include involving private companies to stimulate the local economy. However, foreign investors may fear the region’s insecurity and diminished returns on this agricultural market, lowering the practicality of small scale loans.

For an industry that employs 70% of Nigeria’s workforce and contributes to 40% of the country’s GDP, President Buhari needs to look for long-term solutions in order to reboot the agricultural sector. Seed aid may be a useful start. But the objective of agricultural support in fragile states should not focus solely on increasing production, but to enhance societal purchasing power for food consumption and farm development. As refugees return and rebuild their livelihoods, revenue needs to be generated to increase the ability for farmers to develop their properties. Thus, the Nigerian government must enhance institutions which increase access to necessary agricultural inputs and cheap methods of crop transport around the country.