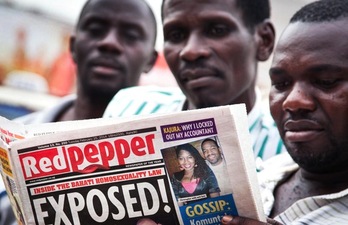 Last month, Uganda joined the ranks of Nigeria, Senegal and Kenya in a rising tide of anti-gay sentiment in Africa. On Feb. 24, Ugandan president Yoweri Museveni signed into law a harsh new bill, which specifies a penalty of life imprisonment for gay sex and criminalizes “the promotion of homosexuality.”

Though homophobia has long existed in the country, the Anti-Homosexuality Act represents an effort to further entrench and legitimize that view – at the expense, of course, of Uganda’s gay citizens. It’s difficult to argue with Obama’s characterization of this bill as a “step backwards” for Ugandans: the bill has driven many gay Ugandans into hiding or out of the country, and anti-gay beatings have become commonplace.

Western donor countries’ response to the bill’s passage, which they’ve called a human rights violation, has been swift: the U.S., Denmark and Norway were just some of the countries to freeze or redirect aid away from the Ugandan government. The U.S. has called the legislation “atrocious,” with John Kerry comparing the bill to anti-Semitic laws in Nazi Germany. It seems these leaders believe that, if they emphasize the immorality of the bill, they can bring Museveni to see the error of his ways and repeal it.

But there’s a problem with this strategy: it’s not working. Museveni seems undeterred by the loss of Western aid; he’ll just turn to Russia, China and India for aid, he’s said. Government spokesman Ofwono Opondo said on Twitter that “The West can keep their ‘aid’ to Uganda over homos, we shall still develop without it.”

Furthermore, homophobia has arisen in Africa in part as a pushback to the West, an attempt to maintain African values in the face of pressure to conform to Western norms. Though the argument that anti-gay legislation is reflective of African values is full of holes (the first anti-gay legislation in Uganda arose under colonialism), the fact remains that it’s the argument many Ugandans believe. For that reason, telling Ugandans that their legislation does not align with Western values seems like the exact opposite tactic from the one we should employ.

Instead, the West should take a pragmatic approach to urging Museveni to repeal this bill. Rather than focusing on the law’s moral implications, we can focus on its practical consequences for Uganda – because indeed, they are serious.

Secretary of State John Kerry expressed concern at the law’s potential “to set back public health efforts in Uganda, including those to address HIV/AIDS, which must be conducted in a non-discriminatory manner in order to be effective.” Any newfound popularity Museveni gained from marginalizing gay Ugandans will likely evaporate in the face of such a setback.

What’s more, the passage of this bill has forced embattled gays deeper into the shadows, with many who fear for their safety forced to flee the country. This, too, may hinder the development Museveni’s government is so sure of: in all likelihood, those with enough money to move to another country are those with the most wealth and education – not the sort of people Uganda can afford to lose during a transitional period.

This law is largely a distraction from the real issues Uganda faces: a struggling economy and a lack of opportunities for education and work for the country’s citizens. No matter one’s views on homosexuality, it makes little sense to allege that gay Ugandans are at the root of all of the country’s social, economic and political ills, as Museveni has suggested.

It is worth noting, as one Ugandan gay rights activist did, that homophobia in Africa did not begin with this law, nor will repealing this law eliminate it. But unless Museveni repeals the law, gay Ugandans – among them, gay rights advocates – will continue to flee their country or hide in fear within it, and any semblance of a gay rights movement will stagnate or disappear.

If the West wants this bill repealed, we need to rethink our strategy. Moralizing about the bill being a human rights violation – however true that may be – rings hollow for many Ugandans, who wonder where the West has been for the countless other atrocities on the continent. What’s more, because Museveni has marketed this bill as an effort to take a stance against encroaching Western norms, reminding him that the bill offends Westerners will likely only persuade him that he’s making the right move.

We would do better to calibrate our approach by emphasizing the bill’s potential detrimental effects on Uganda’s economy and public health system – those are issues Museveni can’t afford to ignore.