President Trump has used economic metrics and corporate job announcements to paint his presidency as an instant success. But while this president is far from the first to make these claims, he does not deserve credit for the current state of the economy. In fact, the overall ability of the presidency to impact the economy is overstated. 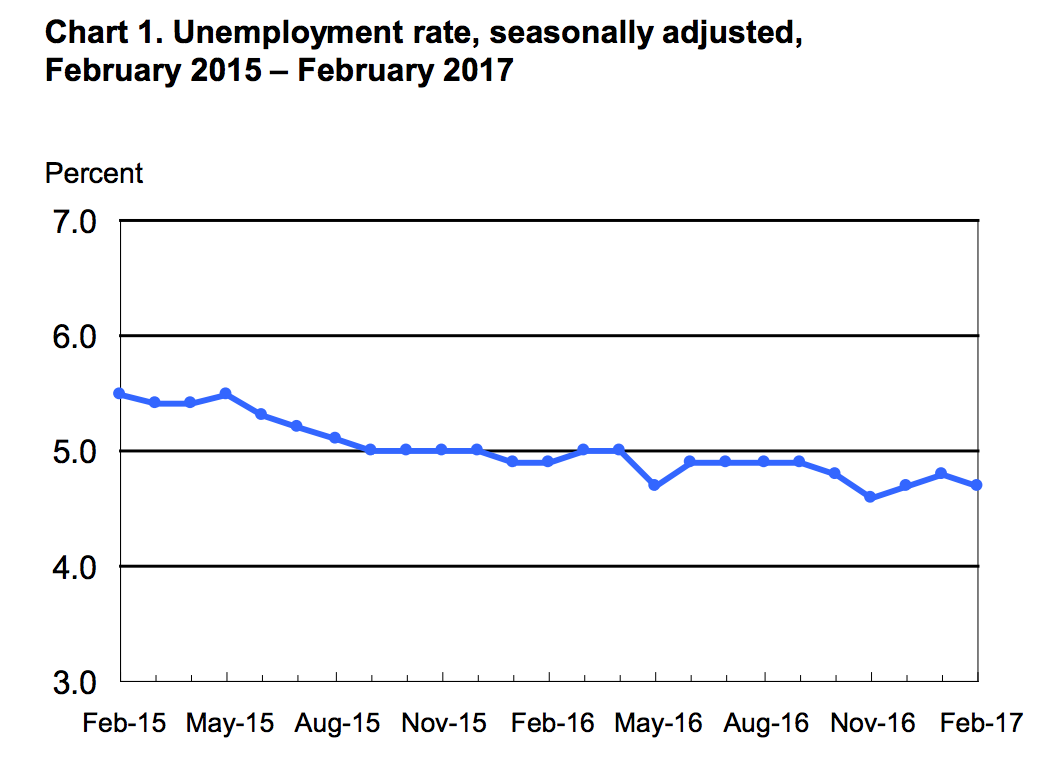 The unemployment over the past two years, from the Bureau of Labor Statistics. With the inauguration of President Trump, the rate has continued to slowly decrease.

​
At 5:41 AM on March 10, President Trump retweeted what would become his administration’s go-to talking point for the day: “GREAT AGAIN: +235,000.” With that, Trump continued the tradition of politicizing regularly-reported economic data. Today’s metric? The number of jobs added in February, the first full month of Trump’s presidency, which resulted in a 0.1 percent dip in the unemployment rate to 4.7 percent. On the surface, having less unemployment seems ideal. But does this have anything to do with Trump? And does this even relate to the strength of the economy? Not everyone seems to think so. Among the critics of the unemployment rate, at one point at least, was President Trump, who questioned both the accuracy and the usefulness of the metric on the campaign trail.

"I talked to the president prior to this, and he said to quote him very clearly, 'They may have been phony in the past, but it's very real now.'" That is the response Sean Spicer gave to a question about Trump’s pre-presidency criticism of economic and employment statistics. “Don’t believe those phony numbers when you hear 4.9 and 5 percent unemployment,” Trump once said. “The number’s probably 28, 29, as high as 35. In fact, I even heard recently 42 percent.” Now, there are multiple interpretations of this comment. One, that the Bureau of Labor Statistics (BLS) is lying to the American people to the political benefit of Democrats. But another interpretation has some merit: that the unemployment rate is not a good reflection of how many people are not working, or of the economy in general.

This comes as a result of the narrow definition of the unemployment rate. While the formula seems simple - the number of people unemployed divided by the number of people in the labor force - it gets more complicated when considering what it means to be unemployed. As the BLS defines it, people are unemployed if they meet two conditions: that they are without a job, and most crucially, that they have looked for a job in the past four weeks. If more people looking for a job find one, the rate decreases. But, if more people who are looking give up(which reflects a weak economy), the rate will also decrease. As an alternative to the unemployment rate, the Bureau of Labor Statistics keeps track of broader metrics. The U-4 rate, for example, includes discouraged workers (people who would take a job but cite the job market as the reason for no longer searching for one), while the U-6 rate includes those who are working part time but would like to work full time. Not included here is a more complete measure for underemployment, which in general refers to people working below their full capacity or education level. For example, graduate students working at McDonald’s because their fields are not hiring do not register as a negative in any of the BLS’ metrics. Politicians occasionally point to the labor force participation rate - the percentage of adults in the labor force - as a better metric, since it registers discouraged workers, underemployed workers, and the like. But, it has its own flaws. What if more high school graduates go to college? The rate declines. What if every single adult in America becomes unemployed? The rate is 100%.

Candidate Trump might have had some justification in dismissing the President’s recent claims of success. So too does The New York Times, which noted that nearly a quarter of new jobs came from construction, likely the result of a warmer-than-expected February. But the White House seems to have other proof. It has highly publicized job announcements from American companies, crediting their actions to the President. For example, after meeting with the owner of Sprint, Masayoshi Son, Trump boasted on Twitter about 50,000 new jobs that Son promised, and added, “Masa said he would never do this had we (Trump) not won the election!” Except, he would have. Like many of these “new” job announcements, this one was recycled, already announced before the election by Sprint’s parent company.

Besides job announcements, Trump has made frequent mention of the bullish stock market. And this time, Trump can indeed take some credit. Politifact rates Trump’s claim of a link between record index highs and his presidency as “Mostly True,” crediting Trump’s promises of fewer regulations and lower taxes (alongside, however, the strength of the economy inherited from President Obama). But while Trump can use his executive power to scale back regulations, changes to the tax code will require Congressional approval. And given the current state of health care legislation and the discord just within the Republican caucus, getting a tax bill past a Democratic filibuster in the Senate seems far less than assured. So while Trump’s stance on regulation may result in a lasting contribution to the market, it may be too early to say that the current state of the market is proof that the economy is better under Trump. And that, of course, assumes a bullish stock market actually reflects a strong economy - something Candidate Trump (among others) attributed to a bubble rather than underlying economic strength.

But the bigger question still exists: how much does the president even influence the economy in the first place? While Americans usually put economic concerns above all else when they go to the ballot box, the evidence that the president controls the economy is weak, as The Atlantic argues in the aptly titled article, “The President of the United States Does Not Control the Economy.” While the president can quickly hurt the economy (by nixing trade deals, for example, or causing other shocks), and make a large impact in the event of an economic crisis, actions to improve growth tend to bear fruit gradually. So even though Bill Clinton, for example, is credited with a strong economy, the short term effect of policies such as NAFTA pale in comparison to the effects of baby boomers reaching their peak earning years, or of the Internet boom that coincided with Clinton’s presidency. Clinton’s signature trade deal has contributed modest growth and diffuse gains to the economy. On the other hand, demographic changes let Clinton enjoy the United State’s highest ever labor force participation rate, while technological innovation Clinton played no role in spurring led to the creation of new industries and thousands of jobs.

So, how much of a relationship is there between Trump’s evidence, and either his or the economy’s performance? As I explained, metrics such as the unemployment rate are far from perfect, but do track economic performance well enough to earn the attention they are given. But the paltry change under Trump, together with old job announcements and a speculative market, tells us little of Trump’s upside for the economy. If there in fact is, it won’t be felt for years. Odds are, any positive economic performance we see won’t be due to him, but because of outside forces and the presidents who came before.