Ukraine: Returning to a Russian Agenda Near You! 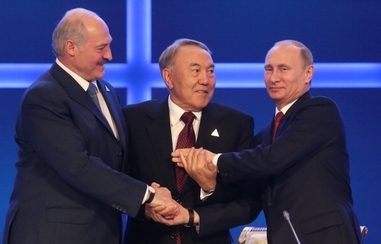 ​Russia’s visible de-escalation in the War in the Donbass is a waiting game; Putin is biding his time and planning to re-escalate.
​


​
Not too long ago, Russia was splashed across everyone’s news feeds for annexing the Crimea, or for deploying troops into Eastern Ukraine, or for sending Putin to his umpteenth ineffective ceasefire negotiation in Minsk with Lukashenko, Merkel, and Hollande. What happened to that? Did the Ukraine Crisis just…end? No. The answer to that last one is ‘no.’

Given the fact that the major US news outlets are presently consumed with the carnival act that is the 2016 Presidential Election, you would be forgiven for thinking that nothing has changed in the Ukraine. In fact, most news outlets have stopped mentioning it completely— barring of course, Russia Today, but since that source is actually owned by the nationalistic Russian government, you’d also be forgiven for ignoring it. The War in Donbass is ongoing. It’s certainly not of the same scale as it was when MH17 was shot down on July 17, 2014, but it’s continuous; its Wikipedia timeline is divided into eight segments and counting due to length and detail. At the time of this final draft—March 22, 2016— pro-Russian troops opened fire on 27 occasions today. The rest of the world has more or less ignored it.

Let’s look at the facts: Putin is sending in troops to the Donetsk and Luhansk regions (he even admitted it at the end of last year, after denying it since the beginning). Not only are the Russian Armed Forces and the Registered Cossacks of the Russian Federation both supporting the pro-Russian militias, but the Chechen President (who was put into power by Putin after the Second Chechen War) Ramzan Kadyrov’s paramilitary organization, the Kadyrovites, is on the ground.

Further, the Minsk Accords—the apparent standing ceasefire negotiations negotiated in the Belarusian capital—bear symbols of Russian control. Aleksandr Lukashenko, President of Belarus, who holds the title of “Europe’s Last Dictator,” gets along swimmingly with Putin, and is the closest the world will ever get to a real-life Bond villain. Given that the accords to stop the fighting are held under the auspices of the most biased ‘neutral’ third party ever, the Accords are a symbolic salve that did, does, and continue to do nothing—which is favorable to Putin.

So what does this have to do with the fact that the West isn’t hearing anything about Ukraine?

Putin timed his battles. By instead drawing focus to the roaring mess that is the Russian entry into the Syrian Conflict, public consciousness forgot the urgency of the Donbass War—the conflict rolled on under the radar, slightly de-escalated now that Russian military advisors formerly in the East of Ukraine had recently been transplanted to Syria. To most, it looks like the War has either ended or took a far, far back seat to the War on the Islamic State—most Westerners don’t even know anything’s still going on in the war-torn country. It’ll also give Putin a chance to build up excuses to eventually re-escalate; noted international relations theorist John Mearsheimer claims that the perceived movement of NATO and the EU into Russia’s sphere of influence (specifically Ukraine) is what ignited the Crisis (his analysis, however, is not entirely causally sound, despite its power on this point). The Ukraine recently joined the Deep and Comprehensive Free Trade Area with the EU; whether or not the EU’s ‘expansion’ into Ukraine is really worth going to war over, if Putin follows the logic of Mearsheimer, he will view that as a further encroachment and use the actions of the beleaguered country to justify a re-escalation.

Putin certainly has aspirations to take eastern Ukraine—he would not have sent his own troops to help pro-Russian rebels had he not believed in their explicit cause to rejoin with Russia, and the belief in the movement of Western trade and defense organizations towards the Russians’ ancient home. Had he been deterred, he wouldn’t have left Kadyrovites—a violent paramilitary group with a record of human rights violations—and other Federation-sanctioned soldiers in the region. Putin has further plans. Given that he has just announced the Russian withdrawal from Syria (a move the New York Times called ‘unexpected’), Ukraine is soon going to be back on the agenda.

We—especially the US—have forgotten the Donbass War in favor of a Commedia dell’Arte farce masquerading as an election. Let’s take a break from our domestic disasters with a reminder that Ukraine’s Civil War is about to re-enter the international consciousness. Increased visibility in Western news outlets will hamper Putin’s effectiveness; the more people on high-alert and available to exert what pressure we can on the Russian government, the more control we hold over a precarious, complex war largely ignored by the international community.