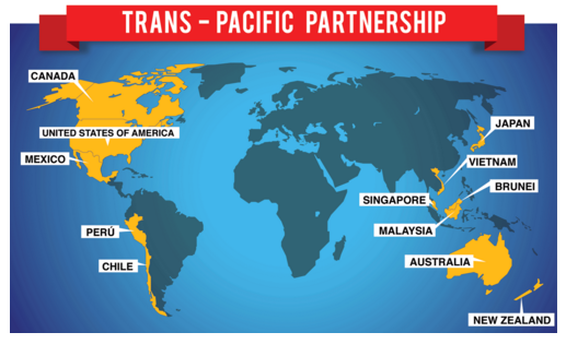 It’s important to note that the full text of the TPP has not yet been released; everything we know about it is based off of the statements of negotiators, reviewers, and the government, along with a host of text leaked by organizations such as Wikileaks. We do know however that the full document has 30 chapters and spans thousands of pages of text[1]. Thus there is far more to it than what is discussed here, and the public won’t know everything until the full document is released. We do however know some of the major points, such as:


Due to the lack of information, fear and uncertainty are abundant, with some claiming that the treaty will lead to the outsourcing of jobs, heightened income-inequality, heightened drug prices, and would allow private investors to block legislation they don’t like. The Obama Administration on the other hand insists that the treaty will be “a win for American businesses and workers”[2]. In reality, the deal defies such easy categorization. While it does have its positives, the TPP is unlikely to be such a net win for the United States.

History
The pact itself was agreed to by all negotiators on October 5th, 2015, after more than 10 years of negotiations[3]. The treaty is between 12 Pacific Rim countries, including the United States, Australia, Brunei, Canada, Chile, Vietnam, Japan, Malaysia, Mexico, New Zealand, Singapore, and Peru, a group whose combined GDP comprises over 40% of the global economy[4].

The next step is ratification by each individual nation. In the United States, The House of Representatives and Senate voted to give President Obama fast track authority, meaning it needs only a majority vote in each house to pass, and cannot be amended[5]. It is primarily supported by Republicans, who favor free trade, and opposed by Democrats, including presidential candidates Hillary Clinton and Bernie Sanders, who believe it will cause job loss and worsen income inequality.

As a trade deal, one of the primary purposes of the agreement is to lower trade barriers such as tariffs among nations to promote trade, which can serve as a win-win at the national level. At face value, this is good for the United States, as the deal is projected by some to add .4% to GDP by 2025. The lowered trade barriers allow each nation to produce more according to its comparative advantage, or that which it can produce most efficiently, and then import cheaply the goods and services which are more efficiently made elsewhere.

The problem arises when one realizes that the United States is most efficient at producing capital-intensive goods, like software, and other nations with large, cheap, labor pools are better served to produce labor-intensive products like automobiles and clothing. What this means is that more jobs will be sent overseas where labor is cheaper, resulting in higher unemployment and depressed wages for the average worker, while capital owners benefit, which would lead to increased income inequality[6], according to the Economic Policy Institute.

Another point of major contention is the expansion of patent protection for American pharmaceuticals internationally. While the exact details are unknown, the Obama industry has pushed for the extension of patent exclusivity for name-brand drugs internationally, with the final text having an extension time most likely between 5 and 8 years. The treaty also mandates something called “linkage” in all signing nations. This would prevent generic pharmaceuticals from being sold if there is any patent disagreement at all. This would functionally allow companies to block the much cheaper generics from being sold at all. This would lead to much higher drug prices worldwide, including in the U.S., as investment in cost-saving generics is limited and their distribution hampered.

One major source of anxiety for the public, the ISDS courts, is actually not nearly as problematic as they seem. Opponents will argue that these courts will allow investors to sue governments over any law they dislike, and limit independent sovereignty of governments. However, it’s important to note that these courts are not new inventions, and that they are a part of most major trade pacts dating back to the 1960s, including NAFTA[7]. The United States has also never in its history lost an ISDS case, and in many cases the losing parties were forced to recoup legal fees for the U.S. as well.

The TPP is a massive document, and with the full text yet to be released, it is impossible to analyze it effectively. However, based on what has been released, the deal is unlikely to be a good one for the average American worker, as it will lead to job loss and depressed wages, and higher drug prices. If you believe that this treaty will negatively impact you, please reach out to your congressperson or senator and make your voice heard. I’d also invite you to read more about it, as it is a very large and complex issue