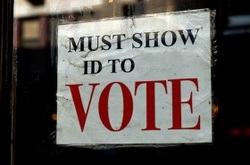 The 15th Amendment reads that “the right of citizens of the United States to vote shall not be denied or abridged by the United States or by any State on account of race”; this blunt language ensures that voting is not just for the wealthy white classes, but for all people regardless of race. Whether confined to property owning white men, all white men or all men, the institution of the ballot has been consistently under attack by the institutions of power.

In America today, the constitutional right to vote is still a hotly contested issue. Republican-controlled legislatures in southern and western states—including, for some reason, Democrats in Rhode Island—have launched a full frontal assault on this right. In 1966, the Supreme Court established that “voting was a fundamental right” because it was essential to the exercise of all other rights. What does the 15th Amendment truly mean if a legislature can take your most basic rights and political power just because a political party, or in this case the legislature, has given up trying to get your vote? It is time for the courts and or Congress to act. Declare voter fraud for what it is; a rouse to disenfranchise minority voters.

If you assume the logic surrounding the implementation of voter identification laws, voter fraud appears to be a significant problem. The American people should be up in arms if there are people sneaking into voting booths and voting illegally. Historically, this may even be accurate. In the 1948 Texas Senate election, where Lyndon Johnson won his first senate seat in a recount by a grand total of 87 votes, there were 200 voters who supposedly voted in alphabetical order. In 1948, there may have been a legitimate reason to combat voter fraud. However, like on a host of other issues, Republican legislatures are 60 years behind the times.

A study done by the Brennan Center for Justice at New York University Law School found that 0.0009% of ballots were fraudulently cast in a 2004 statewide election. Voter fraud is no longer a problem. In fact, voter suppression should be the greater concern. If only one person in a million commits voter fraud, voter fraud has no impact election results. However, if one in four African American voters are unable to cast a ballot because the law requires a form of identification they are unable to get, voter identification laws can cause much more of an electoral issue. Voter identification laws are a solution to a non-existent problem.

Hopefully, there will be enough people who will stand up in the face of voter suppression. Attorney general Eric Holder, has filed a lawsuit on North Carolina’s voter identification law, stating “The state legislature took extremely aggressive steps to curtail the voting rights of African-Americans”. These actions are unconstitutional actions, but also bad policies that should not be ignored. African Americans and other minorities need to know that one party has given up hope in courting their vote; if the Supreme Court does not speak up, they need to in the 2014 midterm elections.

There is never a right time to defend individual rights, especially those as essential as a fundamental right to vote. Martin Luther King Jr. once said that “In the end, we will remember not the words of our enemies, but the silence of our friends.”