​Wealth Inequality and a System that Perpetuates It 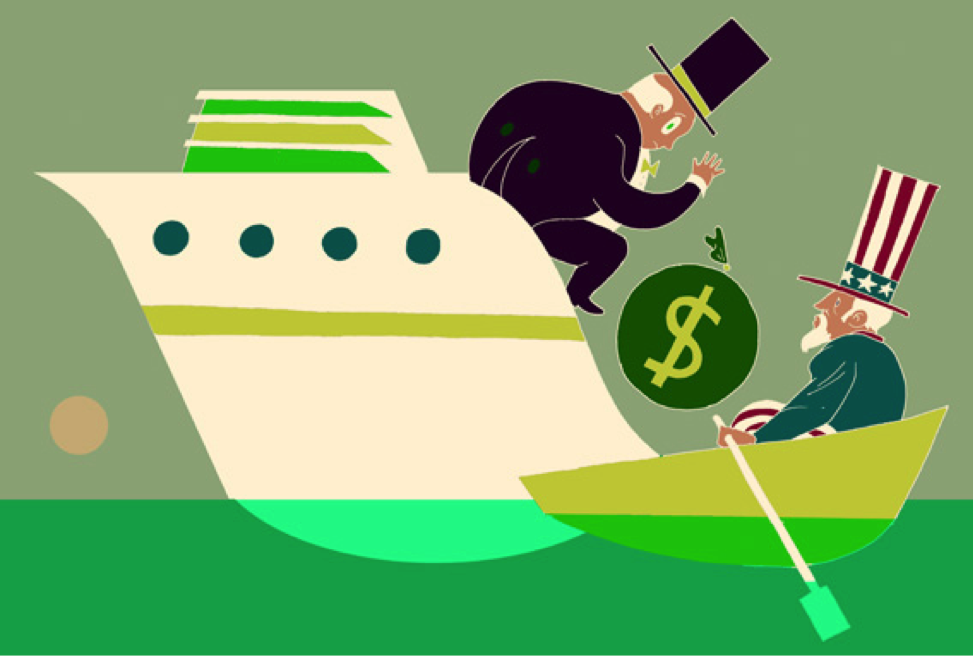 Many of the highest-earning Americans pay the lowest percentage of their income in
federal taxes, revealing a flaw in our system of taxation. Despite this inefficiency, no recent
policy has been passed to address this issue. With the 2016 presidential election 9 months
away, candidates’ proposed tax policies would either ameliorate or exacerbate this system
of inherent wealth inequality.

Americans today file their taxes primarily as a function of their income, paying a tax
rate that is proportional to their level of earnings. Tax brackets add to the progressivity of
the tax system, making it so that those who earn more pay not only a higher average tax
rate, but also a higher marginal tax rate at each step in the ladder of taxed earnings. Despite
(or perhaps because of) the design of the system, tax loopholes—such as a lower tax rate
on capital gains, or revenue received from investments and sale of assets—allow the
wealthiest members of society to pay a lower average tax rate than what they should if all
sources of income were taxed indiscriminately, as noted by the American business
magnate, Warren Buffett. According to a recent Gallup poll, 45% of Americans do not have
money in the stock market, meaning that the lower capital gains tax rate of 15% to 20%
applies to only about half of the country; the richer half of the country that is. People who
invest in the stock market tend to be in the upper echelon of the socioeconomic hierarchy.
We see this trend for a combination of possible reasons: a) they have the education in
business and economics to understand the workings of the stock market; b) they have
learned how to knowledgably invest their money; c) they inherited stocks and bonds from
their relatives and; d) most importantly, the rich, much more so than the poor or working
classes, have the financial resources to risk losing a significant chunk of change. Low-
income individuals and families are looking to make ends meet, not increase their stock
portfolio.

For many policymakers, this area of taxation represents an opportunity to correct a
law that perpetuates wealth inequality. In 2011 and now again as part of his budget
proposal in 2016, President Obama has advocated for the Buffett Rule, a tax law that would
mandate that individuals making $1 million or more each year—no matter the source of
income—must pay 30% of that income in taxes. Aside from ensuring increased tax revenue
from high-income households, the Buffett Rule seeks to correct economic inefficiencies that
occur when people hire tax lawyers and accountants to purposely look for distortions and
weaknesses in the tax law. As mentioned in a White House report, the IRS found in 2009
that among millionaires, “a full 22,000 households making more than $1 million annually
paid less than 15% of their income in income taxes — and 1,470 managed to pay no federal
income taxes on their million-plus- dollar incomes.” Not only does this allow the highest
income groups to pay a much lower proportion of their income in taxes, it significantly
reduces government revenue that could have then been used to aid the poor and working
classes through social programs like Temporary Assistance for Needy Families, Food
Stamps, and the Earned Income Tax Credit. Also known as the Fair Share Tax, the Buffett
Rule is heavily favored by Democrats, whereas Republicans have their own spin on the
issue. They suggest that if millionaires like Mr. Buffett believe they are not paying enough
in taxes, then the IRS should make it easier for them to voluntarily donate money to the
government through their tax filings to help pay down the federal debt. Neither the
Republican-backed Buffett Rule Act of 2013, nor the Democratic favored Paying a Fair
Share Act of 2012 were passed into law, leaving the issue of taxation as fair game in the
2016 presidential election.
​
As conveniently summarized by the Tax Foundation, the 7 remaining presidential
candidates differ along political party lines in taxation policy. In the Democratic camp,
Nevada primary winner Hillary Clinton proposes adding a 4% surtax on incomes over $5
million and raising rates on capital gains from investments held for fewer than 6 years.
Senator Bernie Sanders wants to tax capital gains and dividends at ordinary income rates
for households making more than $250,000. The 5 Republican candidates all support either
lowering or flat-out eliminating the tax on capital gains. The least drastic of all the
proposals is Kasich’s, which suggests lowering the rate on long-term gains from 20% to
15%. Although campaigns like Bernie Sanders’ made it clear to many Americans, especially
younger citizens, that wealth inequality is a huge issue in our country, Republicans seem
not to notice or care. Their proposed lowering of the capital gains tax shows a commitment
to preserving the wealth of those in the upper class, at the expense of equitable and
efficient collection of government revenue. The fate of our country’s wealth
inequality—advocated by some, ignored by others—thus rests in the hands of the next
president, provided he or she can actually pass legislation through an increasingly divided
Congress.