Where are All the Balloons? 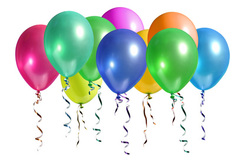 
In the past few months, some of you may have had a difficult time trying to come by inflated balloons. What’s a birthday party without those cheerful floating bags of air? Helium, the key ingredient to those colorful adornments, has recently experienced a shortage. While helium may be one of the most abundant elements on Earth, after these past few months it no longer seems so. The element often associated with high-pitched humor, is in a situation which is no laughing matter.

In 1925, The Federal Helium Program was established with its purpose being to ensure the supply of helium to the Federal Government for research, medical and defense purposes. In 1996, this program underwent privatization and was allowed to make direct trades with private companies for commercial purposes. This amendment hoped to incentivize other helium producers into entering the market, by forcing the industry’s biggest supplier to sell its wares entirely by 2015.

With this not coming to fruition, one of the toughest shortages in helium history has occurred. The culprit for this lack of investment into the helium industry is a result of government price regulation that forced helium to be priced at below market levels, killing any incentive for private investors to drill and sell helium. This has decreased the amount of helium in the market, leading to the inevitable shortage of today. This is a frightening situation because of the dependence on helium that the healthcare industry has developed. Hospitals depend on helium for its cooling properties; MRI machines cannot run without it.  Helium is an essential part of modern medicine, without it many patients are put in danger.

On September 19th, with a 97-2 vote in the Senate, a measure attempting to alleviate some of the helium market’s stress was passed. The bill orders the Federal Helium Reserve, the supplier of a third of the world’s helium to wind down operations by October 8th, leaving only 3 billion cubic feet in its possession. This small reserve will be reserved solely for federal agencies and researchers. The bill is expected to alleviate short-term demand for helium by flooding the market with the good and meeting its current demand. In the long run, with the government out of the helium market, the once tightly regulated market price will be allowed to float on its own. The hope is that with a consistent market price, private sector corporations will invest into the market, drill for helium, and end the possibility of another long shortage. The Senate’s action today prevents what would have been a devastating toll on helium dependent industries. The House, on September 25th, will put this bill to a vote. If passed, as expected, it will be on the President’s desk within a week and the helium market will have a bright outlook.