Who Wants a Free College Education? Go to Germany 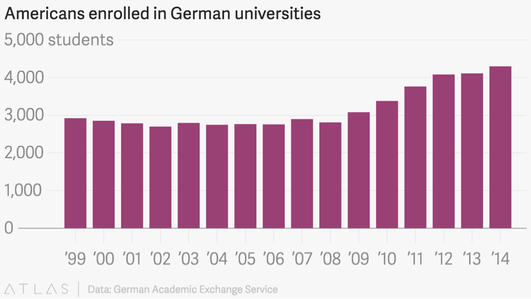 
​
More American students are opting to study in international       universities, especially Germany, instead of American schools. Why are they choosing to leave, and what problems are resulting from this?

​
This report centers on an increasingly important issue for the United States: college expenses. The high cost of higher education is increasing financial barriers to college enrollment. More Americans are choosing not to enter college because of its expensiveness and the improved job market. Just 65.9% of 2013 high school graduates enrolled in college, which marks a steady decrease from its 70.1% peak in 2010 and the lowest rate since 2006. In contrast, more American students are enrolling in foreign colleges because they are much less costly. This trend comes with consequences. If the United States does not improve its student loan program or gives more incentives, international schools will become stronger relative to American schools and the U.S. workforce will be weaker.

Every student and parent is familiar with the high costs of attending a college or university in the U.S. According to the White House, 70% of bachelor’s degree recipients leave school with debt. Student loan debt in the U.S. totals $1.2 trillion, which is held by about 40 million Americans. Last year’s graduating class owed an average of $35,051, the highest in national history. Only home mortgages have more total debt than student loans. Since the 1970s, tuition rates have risen by 1,120% while the state funding of universities has declined by 40%. Now a private four-year institution costs approximately $43,921 and a public one costs $19,548

Is the U.S. doing anything to help reduce debt? Current federal undergraduate and graduate student loans have interest rates of 4.29% and 5.84% respectively. This more than triples the current 1.4% federal inflation rate. In an effort to reduce the budget, last year Republicans sought to make college less affordable by cutting federal programs. This included eliminating guaranteed funding for Pell Grants and overriding laws that help students with debt. Obama proposed free community college, but Congress has yet to pass a bill. In other words, nothing is being done to drive down college expenses.

Meanwhile, the rest of the world has significantly lowered education costs, which is attracting more Americans. More than 46,500 U.S. students pursue degrees abroad. Of these students who choose to study overseas, 42% receive undergraduate degrees, 42% masters degrees, and 16% doctoral degrees. The most popular destinations include the United Kingdom (36% of American students), Canada (20%), France (10%), and Germany (9%). Britain’s top schools cost $25,000, while Canada’s cost $15,380. Less premier schools are even cheaper. International universities have become attractive for Americans because they provide quality education at relatively low costs.

Take, for instance, Germany, which has witnessed the largest increase of American student enrollment this past decade. Between 2003 and 2013, Americans enrolled in German universities has increased by 56 percent and reached 4,654 students in 2015, a 20 percent increase in the last three years. These countries have many programs that are taught in English and with little to low tuition costs. These two qualities strongly attract students. As one student getting a master’s degree abroad explains, “when you are talking free versus $50,000, I feel like there is no contest. I can't justify going back [to the United States].” Most of the students pay only $200 to $250 per semester to enroll, plus room and board. For one student, rent, tuition, and health insurance costs between $6,000 and $7,000 a year. Another American only spends $7,200 in total living and tuition expenses and confirms that when she graduates, she will “finish with no loans at all.”

Does it matter that students are getting degrees abroad? Maybe not right now, but if more students continue to leave, the United States could lose valuable workers. Americans who study abroad are more likely to work abroad. As Dorothea Rueland, Secretary General of the German Academic Exchange Service states, “nearly 50 percent of all visitors from abroad remain in the country after their degree, paying taxes and providing the labor market with skilled workers.” This isn’t just short-term work either. 40% of students plan on remaining in Germany for at least 10 years. The German Government pays for most of international students’ expenses in hopes that they will help fix the current labor shortage in Germany. Meanwhile, they will be taking American students and future workers.

Critics often argue that pursuing a college degree should be expensive because the U.S. has the best and most prestigious universities in the world. Good schools are still attracting talented students and being successful. However, college is becoming less and less accessible to people because of the prices. Consequently, upward economic mobility is limited if people cannot pay for college or spend much of their life in debt. Getting a degree could potentially turn into an elite privilege. In addition, astronomically high loan rates hurt millions of students and graduates, thereby damaging the young workforce. Finally, if a large portion of the population decides not to enroll because of tuition and loan expenses, then some middle and lower quality schools will lose revenue and have less qualified students. This country’s high price on education may have more consequences than people perceive.

The United States needs to take action to make college more affordable and therefore more desirable for students. Enrollment rates for high school graduates have dropped, while more people are receiving degrees abroad. Some policies cannot be implemented are not feasible. For example, it would be impossible to make college free. The average cost of an undergraduate degree in Germany is $32,000, paid for entirely by the state. The U.S. can’t be that generous because are tax rates are lower than in Europe. However, the United States could lower interest rates on student loans, provide more scholarships, or increase public university funding, so tuition prices will be cheaper. The United States too often disregards its students and has not properly incentivized them to earn degrees. The country needs to do more to invest in human capital to have a more productive workforce. Otherwise, people will select international universities over local ones and we will eventually lose workers to Europe. Even worse, Americans who don’t study abroad will still be unable to pay for school here.