Who Wants to Be An Indian Prime Minister 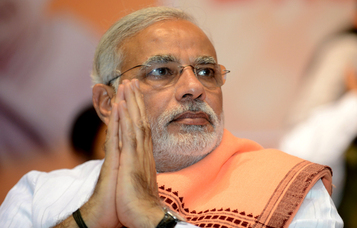 India is populated with the world's second largest population at over 1.2 billion people. So of course the election that is currently taking place in the South Asian mega-country is massively important for its billions of people and for the rest of the world.

The elections will decide what party gets the majority in India's parliament elections. That party's leader will then succeed decade-long minister Manomohan Singh. The three frontrunners include Arvind Kejriwal of the Aam Aadmi Party (AAP), Rahul Gandhi of the Congress Party, and Narendra Modi of the Bharatiya Janata Party (BJP).

Modi is currently the favorite to lead his right-wing Hindu party to victory in May, but several hurdles remain for the former minister of Gujarat. The biggest issue lies in voter memories of a 2002 mass extermination of almost 2000 Muslims in Gujarat. Many believe that Modi, who was governing the state at the time, did little to prevent Hindu rioters from attacking Muslims.

This checkered history with Hindu nationalists has caused Modi’s past to be questioned by many Indians, especially Muslims. The Muslim vote in India makes up almost 16 percent of the voting population, so the group cannot simply be ignored. And the group is not simply going to ignore Modi’s past. Many Muslim voters have reported uneasiness with Modi’s supposed complacency with the Gujarat massacre. A statement by one sums up the position of many, “We haven’t decided who to vote for, but it will be against him.”

However, despite what would appear to be a general Muslim opposition to Modi and his party there are hints of support. A campaign has emerged amongst some Muslim groups with the slogan, “Muslim for Modi, Modi for Muslim.” Additionally, Modi has tirelessly attempted to remind groups that he was found not guilty of any kind of complacency in the attacks in Gujarat. He also has argued for furthering “progress” for Muslims, who have stumbled economically in relation to their Hindu majority counterparts. Modi has said he wants better access to technology and jobs for the Muslim minority who often feel ostracized in the Hindu country.

The Muslim vote will prove to be integral in the ongoing Indian elections. Historically, many Muslim communities all vote for one party as there is little variation within groups. A fear for some in India is that an election win for Modi could mean a revival of the religious riots of 2002, this time on a nationwide scale. Thus, his back cannot be turned on the constant religious tensions present in the country. As long as Modi can maintain relations between ethnic groups, he can focus his efforts on addressing India’s largest problem, its economy.