Why the “American Umpire” Must Create New Expectations for France 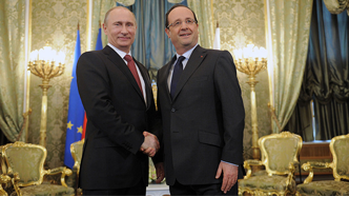 
Recently, guest speaker Elizabeth Cobbs-Hoffman, Dwight Stanford Chair in American Foreign Relations at San Diego State University, visited Cornell University and presented her lecture “America: Empire or Umpire, and at what cost?” Drawing from the main themes in her most recent book American Umpire, Cobbs-Hoffman argues that since 1947, the United States has assumed the role of “umpire” in the international community by increasing its intervention in foreign affairs and effectively defending the world. “Umpire” is in direct contrast to the term “empire,” which many have inaccurately employed to describe the United States’ foreign policy decisions. For Hobbes, “empire” is an ill-defined term that does not take into account the context of U.S. expansionism or world history, among many factors. In contrast, the role of umpire, she insists, is natural for the U.S. because it has always acted as an umpire among states. In fact, the writers of the Federalist papers use the word “umpire” to describe the federal government as a powerful, supranational entity that intervenes episodically without taking over individual states.

Because of this role, the U.S. is a crucial resource to other countries, but it is also a target. Cobbs-Hoffman explains that “no one likes the umpire” and that “umpires never win.” Still, “no one is willing to play without one,” and this is why the U.S. is constantly called upon during international crises. For the U.S. such a role is taxing, but more importantly, the international system is unstable as long as its foundation is unipolar, according to Cobbs-Hoffman. Consequently, the U.S. must also create expectations for others to assume a leading role in international affairs and step behind the plate.

The critical question is whether other states are willing and able to bear this responsibility. After all, most of U.S. influence comes from its unmatched economic and military power. The European Union is a key international actor, but its constituent states remain too culturally and politically divided on several issues to collectively act as a single umpire. Who, then, can? There is mounting evidence that France can and wants to share this role with the United States. France is becoming increasingly assertive in its foreign policy, and it has been an essential actor in recent crises, including those in Iran, Syria, and Ukraine. France’s position as an intermediary between the U.S. and Russia is particularly natural, given its historically strong cultural and political relationship with Russia, and it should be embraced and used prudently.

Cultural ties between Russia and France date back to the reign of Peter the Great, when French was adopted as the language of the nobility. This encouraged more cultural exchange, especially an interest in French literature, philosophy, and art. Catherine the Great was determined to “civilize” Russia, and she frequently corresponded with and hosted famous Frenchmen. For Russians, Paris was always a place for cultural and intellectual apprenticeship.

Even with some ups and downs, Russia and France have had relatively good relations. They were first drawn together in 1887 by shared geopolitical interests regarding Germany and Austria-Hungary. While the Franco-Russian alliance between 1892 and 1917 took relations to a whole new level, the Franco-Soviet Treaty of Mutual Assistance of 1935 foreshadowed the fact that even during the Cold War, France would try to achieve a détente on its own terms, following a separate path from the U.S. and managing to keep a dialogue with the Soviet Union.

Despite President François Hollande’s low domestic approval ratings, his decisive foreign policy “is a good fit for France,” according to a New York Times article. Hollande’s stance toward Syria and Iran was among the most aggressive, and although aggressiveness does not always make for good foreign policy, these positions show that France can stand firmly when necessary. Just as U.S. decisions are often met with serious disapproval, France must also bear criticism if it is going to step up to the plate. In the case of Ukraine, France and the United States have largely agreed, with French Foreign Affairs Minister Laurent Fabius threatening “significant measures” against Russia. Hollande has emphasized that France has to exert “all necessary pressure...to push for dialogue and seek a political solution to the crisis.”

With the current crisis in Ukraine, it is difficult to argue that any major power has good relations with Russia––even China has expressed its disapproval of the Russian military intervention in Crimea. However, just last November Putin was touting Russia’s good relations with France, telling French Prime Minister Jean-Marc Ayrault that “France is one of Russia’s priority partners in the world and particularly in Europe.”

Thus, for the U.S., the beginning of creating expectations for other world powers to step behind the plate is to encourage France to stay on its current foreign policy path. This is not to say that the U.S. should immediately hand over all responsibility, but rather it should welcome French decisiveness. This will start by recognizing the foreign policy areas where France has an advantage, such as with Russia, and putting more pressure on France to assume a larger diplomatic role. Letting go of some control will not be easy for the U.S., but it will be an essential step to creating a more balanced international system.