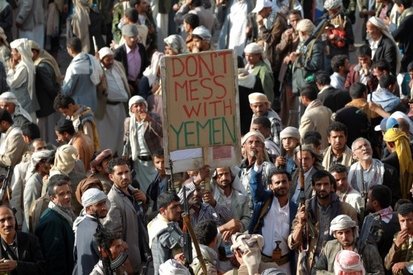 The United States assistance in Saudi Arabia’s proxy wars throughout the Middle East and Africa could set a dangerous precedent of involvement. United States involvement will only further escalate and extend the conflict that is causing a humanitarian crisis in Yemen.
​On March 17, 2017 an airstrike off the coast of Yemen indiscriminately killed 42 Somalian migrants. This incident, said to have been conducted by Saudi Arabian forces, is simply the most recent in a growing trend of violence in the region. The Gulf of Aden and the Red Sea are host to a multitude of smugglers and military vessels, and it is likely that Saudi forces were attempting to thwart the smuggling of Iranian arms into Yemen. Civilians and migrants, however, are increasingly bearing the burden of this proxy war between Saudi Arabia and Iran. Yemen is a key player in Iran and Saudi Arabia’s struggle for power and influence in the region. Yemen has been allied with Saudi Arabia for years, and both the rebel take over in 2014 and subsequent civil war pose a threat to Saudi Arabia’s influence in the country. The Houthi rebels represent the Shia Muslim minority in Yemen which is why Iran, the regional Shia power, has offered military support. Despite an extensive air campaign and naval blockade, Saudi and pro-government forces have been unable to regain control of Northern territories and the conflict has continued to drag on.

The Trump Administration’s escalation of air strikes and special forces raids in the first few months sets a dangerous trajectory for United States involvement in Yemen going forward. In one week, the number of airstrikes in Yemen surpassed the total annual bombings for any year of the Obama Administration. The deregulation of drone strikes not only sets a precedent for the ample use of the technology, but also the need for new international law surrounding the use of drones.

The United States has no real interest in Yemen as the Houthi rebels do not pose any major risk to national security. Continued air strikes and the brutal killing of civilians is not only exacerbating the current humanitarian crisis but also instilling anti-American sentiments that could make the area susceptible to future terror cells. Becoming more involved in the conflict would also continue to strain already contentious relations with Iran.

It would be more beneficial for the United States to direct their efforts to bringing an expedient end to the conflict through diplomatic means. Along with this, there is a growing need for humanitarian aid to both Yemen and Somalia. The most recent reports from the UN estimate that there have been more than 11,332 civilian casualties from the conflict, with a disproportionate amount of those killed being children. Additionally, over 18 million people are in need of some form of humanitarian assistance and the famine is becoming increasingly emergent. Rather than fighting a war that the United States has no real stakes in and destabilizing the region, they should seek to stabilize Yemen by offering aid and working with the international community.