Why Vulgarity in Politics Matter 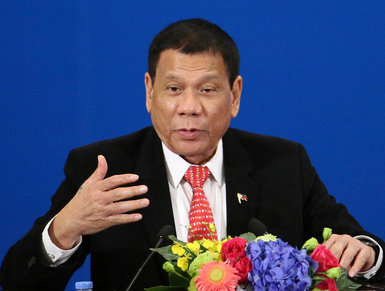 From Duterte, Hun Sen, to President Trump, different political leaders’ use of vulgarity are creating dangerous situations. The danger of political vulgarity lies in normalizing the expression of vulgar bigotries and reinforcing the culture of impunity. Moreover, its impact on international diplomacy is increasingly salient. How can the world respond to the resurgence of vulgar politics? My article explores the avenues.
Before he reluctantly and painfully endorsed Donald Trump for president, the Florida Senator Marco Rubio made the startling observation that Trump was “the most vulgar person to ever aspire to the presidency.” President Trump’s use of innuendos and crudity throughout his road to the White House is not the type of vulgarity that can be easily ignored. Dropping all pretense of civility, he seemed to have singly stripped off the dignity of the political process.

President Trump’s little to no regard for propriety finds an echo in Southeast Asia. Rodrigo Duterte, the President of the Philippines, frequently shocks the world with controversial statements that reflect a crass dispensation of judgment. Meanwhile, the de facto ruler of Cambodia since 1985, Hun Sen is well known for his strategic use of vulgar tactics towards his opponents. The Phnom Penh Post yearly report, titled, “A Year on the Edge: Sex, Lies and the Audio Tapes,” brilliantly (and yet sadly) summed up the politically driven phone-tapping, sex scandals and jailed activists that dominated Cambodian politics in 2016.

Haruki Murakami compared nationalism to “cheap alcohol”, which “gets you drunk after only a few shots and makes you hysterical…makes you speak loudly and act rudely…but after your drunken rampage you are left with nothing but an awful headache the next morning”. Political vulgarity, most succinctly defined as the approach of rudeness in politics, seems to provide another “cheap alcohol” in contemporary politics. From Washington D.C., Manila, to Phnom Penh, the various kinds of mockery, belittlement, obscenity, misrepresentative exaggeration, character assassination, insulting and ideologically extremizing language, continue to provide a profuse dose of daily dark political humor. Ultimately, the cases of Trump, Duterte and Hun Sen are evident of the efficacy of rudeness in politics in our own time.

First, vulgarity is extremely politically useful. They are rude rhetorical weapons strategically established over those who constitute valid targets. Moreover, when obscenities are applied to targeted political opponents, the targets’ prestige can be greatly tarnished. This is manifested in the strange saga that started in Cambodia in March 2016, when tapes of flirtatious phone allegedly between the opposition party (CNRP) vice president Kem Sokha and his hairdresser were leaked online. Despite the murky details of the recordings and suspicion towards claims that the opposition politician was soliciting a prostitute, the drama has undeniably defamed Sokha. In May 2016, the Phnom Penh Municipal Court charged the deputy opposition leader with committing “flagrant crimes”. Second, it is vital to embrace the uncomfortable fact that vulgarity is appealing because it powerfully exposes (although mostly inconsistent) political truths. For the two populist, anti-establishment politicians, Trump and Duterte, political vulgarity strips away the polite euphemisms that mask longstanding social problems. By calling on “nasty women” and “ban on all Muslims,” Trump’s distasteful rhetoric resonates with those of the domestic population convinced by dialogue that embraces sexism and perpetuates a wrongful bigotry towards a religion; whereas by berating the former Colombian president Cesar Gaviria as an “idiot” for “lecturing” him on his plan to “kill all” the country’s suspected drug users and dealers, Duterte consolidates his popularity among people who resent the previous administration’s inability to address the domestic drug situation.

While political vulgarity is unmistakably a strategic response to domestic circumstances, let there be no mistake that vulgar politics is never the solution to the problems at hand, neither is the politics of resentment and alienation. Experiences from the three countries have sufficiently demonstrated that vulgarity is tremendously effective in normalizing the expression of bigotries, and thus exacerbating the preexisting divisions and vulnerabilities felt by certain marginalized social groups. In both Cambodia and Philippines, vulgarity further reinforces the culture of impunity by sanctifying state actions directed at the “enemies” perceived by the authoritarian leader.

Equally worrisome, the resurgence of political vulgarity impacts not only domestic policy, but also foreign policy. Vulgarity implies a preference for a direct, and usually forceful political approach and a focus on narrow self-interest over reasoned discourse and sustained political conversations. In fact, analyses agree that it is difficult to isolate the upsurge in vulgarity in Cambodia and Philippines from the recent trend of a greater inward-focused foreign policy-making and prickly nationalism in other Southeast Asian states such as Indonesia. In other words, vulgar politics partly disincentivizes states to cooperate with regional and outside partners to address the growing external challenges that are facing the region. This further undermines the role of Association of Southeast Asian Nations (ASEAN) as the lynchpin of external policy-making in the region. On the other hand, as leaders normalize the use of vulgarity domestically, they similarly feel free to express bigotries in international diplomacy, which has consequently elevated the risk of military confrontations.

Change or No Change? How then can the world respond to the resurgence of vulgar politics?
While it is impossible to require any regime leaders to commit to maintaining civility and sobriety in their tone, as noted, political vulgarity in the domestic sphere cannot be dissociated from international politics. One can expect that international diplomacy, provided the right incentives, can have effective political leverage over the politicians who rely on vulgarity. In the case of Southeast Asia, strengthening regional engagement through bolstering the role of ASEAN is key to mitigating the effects of vulgar and divisive politics in the region going forward. In particular, the issue of political vulgarity and its consequences such as social alienation should be elevated to a matter of greater priority within the ASEAN’s high-level meetings. Moreover, if the region would like to contend with crucial external challenges posed by the growing Chinese ambitions and military buildup and the spread of Islamic extremism and corresponding threats of terrorism, then Southeast Asian governments must understand the vital need for deepening engagement, and the effects of any retreat from multilateralism. China, who is exploiting the leadership vacuum in the region to its own advantage, should also play a more proactive role by using its political leverage over its aid-recipient countries.

​As for the United States, the current administration must be able to grasp the spillover effects its leader’s endorsement of divisive politics is having on a global scale. It is no coincidence that both Hun Sen and Duterte applauded the “Trump way.” The administration needs to soberly consider how its vulgar politics could negatively affect its engagement with Southeast Asia, which remains crucial to the U.S. geopolitical and economic interests. The bottom line is as follows: In the long term, the United States will not benefit from an increasingly insular and, in many cases, nondemocratic governance in Southeast Asia. Especially following the U.S.’s withdrawal of the Trans-Pacific Partnership (TPP), the government should reiterate its commitment to remain engaged and active in the region. A true leader would require the United States to approach the region with sustained and respectful conversations – vulgarity should certainly not be the overruling manner of diplomacy.