​Why You Should Care about Falling Oil Prices 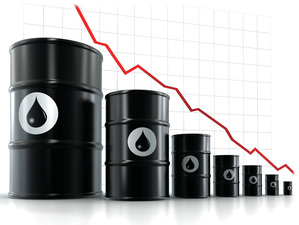 Even if you don’t typically follow macroeconomic trends or commodity pricing, you’ve been hearing for months now that oil prices are plunging to historic lows. Exactly why prices are falling is complicated and not fully understood. If you’ve been paying attention, you may be able to point to Saudi Arabia and U.S. shale production as reasons for the decline – but that’s a topic for another article. More interesting and important are the oil glut’s implications for the world economy. They are many, and together they pose a huge threat to an already unstable world.

Let’s start with the most direct effect – deflationary pressures. Oil is a unique commodity in that changes in oil prices bleed into the prices of virtually everything else. If oil prices rise, so do the prices of everything that uses oil in its production. When oil prices fall, most goods become easier to produce, and every good becomes cheaper to ship. This generally has a stimulatory effect, as consumers use savings on gas to increase consumption. But one can have too much of a good thing. Oil has plunged so aggressively that we’re flirting with negative inflation, or deflation – where money increases in value over time.
Deflation is damaging from a growth standpoint. It raises the value of holding cash, thus reducing the relative yield of investing. Banks and firms will be less willing to invest in bonds, stocks, or research and development projects if the relative return of these investments is lower.[1] What’s more, declining growth and deflation set a nasty trap in which nobody invests because they expect deflation, the economy remains stagnant because nobody invests, and a slowing economy exacerbates the deflation. Expectations of deflation become a self-fulfilling prophecy when growth is sluggish.
Central banks usually have a solid defense against deflation. They slash interest rates to increase the relative return of investment by lowering borrowing costs, thus stimulating people to spend rather than hold on to their money. The resulting increased economic activity increases capacity utilization and facilitates tightness in the labor market, both of which drive inflation. What makes this particular situation so unsettling is that central banks around the world are either tight up against the zero bound, like the Federal Reserve, or they’re into negative rates territory, like the European Central Bank and the Bank of Japan. They have almost no stimulatory tools at their disposal for fighting deflation. [2]
Concerns about global growth exacerbate, or more appropriately, catalyze these worries. China’s growth has come under question as it undergoes the rough transition from a centrally planned, export-based economy to one that is based on services, consumption, and a freer market. The entailing slowdown in manufacturing, which generally accompanies the aforementioned changes, came earlier than the Chinese government expected, and a slight panic ensued.[3] A significant slowdown in China’s economy would have rippling effects among emerging markets, although the real U.S. economy should come out relatively unscathed. Emerging markets would suffer because a large part of their GDP comes from Chinese demand, whereas this makes up a small portion of U.S. GDP.
More generally, low oil prices are putting significant pressure on oil-exporting countries. Venezuela, which has found itself on the verge of economic and government collapse, is Exhibit A. Low oil prices have exposed mismanagement of the state-owned oil industry and decades of irresponsible fiscal decisions.[4] Nigeria, which uses oil to finance 70% of its budget (making it one of the world’s most oil-dependent economies), is facing currency deflation and a slowdown in growth.[5] It’s unlikely at this point, but the oil glut could cause some emerging economies some serious pain.
Realistically, oil prices continuing to fall will not cause deflation on their own. But if enough of the global growth concerns come into fruition – maybe some emerging economies could start to tank, a weaker Eurozone country collapses under crippling debt, or China’s GDP growth comes in significantly under target – we could quickly find ourselves in hot water. Any combination of these could bring uncomfortably low inflation down even further. That is something we are ill equipped to deal with, and we won’t be for some time. For now, macroeconomists should keep a watchful eye on the real economy. It’s easy to get caught up in falling stock prices and bond yields, but when it comes to recessions and economic collapse it’s the health of the real economy that matters most. Perhaps if global growth was more robust we wouldn’t be worrying about low oil prices at all.


[1] There are more ways in which deflation affects growth. For more information, read: http://krugman.blogs.nytimes.com/2010/08/02/why-is-deflation-bad/