Will the Midterm Elections Bring Doom for the Democratic Party? 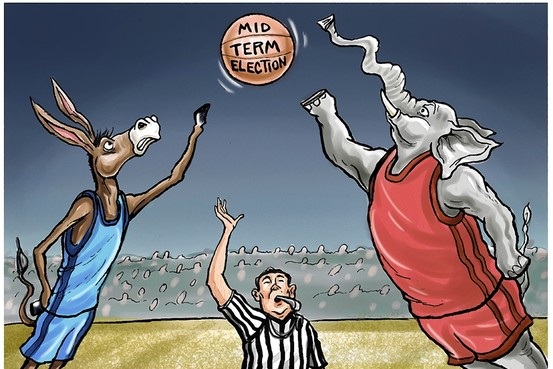 In less than four weeks, a major power shift is going to take place in Washington D.C.. The campaigns for midterm elections are in the home stretch, and the fate of Congress – more specifically, the Senate – hangs in the balance. Midterm elections obviously do not receive as much attention from the media and general public as years featuring a presidential race, but they are still extremely important in regards to how things operate in the Capitol. The races themselves have a different feel than those happening during a general election year. There is no political tide to push casual voters to the polls, which can lead to unusual results, as was the case in 2008 when the optimism from Barack Obama’s campaign carried the  Democrats to domination in the House and Senate. The voters in midterm elections are often firm supporters of their respective party, and in many cases states where seats changed parties due to influence from a presidential election, the status quo will return six years later (two for the House of Representatives) when voting falls on a midterm.

With all of this in mind, the upcoming elections are very intriguing. Six years ago, fervent support for Barak Obama and heavy disdain towards the Republican establishment allowed the Democrat to take over both the House and Senate. This gave President Obama immense power during his first two years in office, which allowed him to implement large parts of his agenda, most notably restructuring healthcare through the Affordable Care Act. The House returned to a Republican majority in 2010, and a return to Democratic control this year would be nearly impossible. The fate of the Senate, however, is murkier. As it stands currently, Democrats hold thirty-four seats that are not up for reelection, compared to thirty for Republicans. Of the thirty-six seats up for reelection, ten are considered “safe” for Democrats while fourteen seem secure for Republicans according to polls from CNN, CBS, and The New York Times[i]. The two parties are essentially tied at forty-four seats apiece, leaving twelve races to decide who will hold the majority. A list of those states and ones to be mentioned can be found here. Of the twelve remaining states, each party feels optimistic about winning two states: the Democrats in Michigan and New Hampshire and the Republicans in Georgia and West Virginia. Of the eight “up for grabs” states, all the polls indicate close contests, but it seems that Republicans have an advantage in at least four races.The party of a second-term president typically has a difficult time during the six-year midterms, as voters become tired of even the best presidents and seek change. The gridlock in Congress is doing little to buck this trend. Even with an economy that has shown recent improvement, voters have become exasperated with President Obama and the state of Washington in general. Republicans have been tailoring their campaigns to capitalize on this sentiment, and their efforts seem to be working.  All in all, the situation looks dire for the Democratic party, and it is has become almost a foregone conclusion that they will lose the majority in the Senate when voting takes place on November 4th.

With the very real possibility of a Republican-controlled Congress taking hold in a matter of months, one has to consider what that means for the last two years of President Obama's term. He has already had considerable difficulty moving his proposed policies through Congress due to lack of support in the House of Representatives, his recent failures to institute immigration reform a telling example. Without a Democrat majority in the Senate, it will be virtually impossible for him to move any of his agenda through the legislative process, as Republicans have shown no interest in reaching across the aisle to help move bills through. President Obama could resort to other methods, such as executive orders, to achieve his goals, but that power does have significant limits and in the past he has received criticism for attempting to it use, once again his recent struggles with immigration come to mind . What is more likely is that the president will have little means for enacting the changes he and his party want, and he will instead have to settle for pushing back against Republican challenges to policies that were put in place earlier in his term. This, however, may be what he has earned. As previously stated he was always going to have difficulties with these midterm elections. The damage was done long ago when he lost seats in in the 2010 election and failed to make them up during his own election year in 2012. In addition questions have to be asked about why his presence in the White House so infuriates Republicans. Is it possible that he could have put in a greater effort during the past six years to build a working relationship with the Republicans, and make a situation like this less dire.    No matter how you look at it, President Obama is in a tough place, one that could have been avoided but will nevertheless  make his last two years in office very different then what he would have hoped.