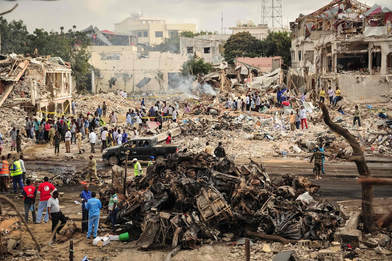 In the wake of the deadliest terrorist attack in Somalia’s history, the people of Mogadishu are desperately trying to recover—while the West turns a blind eye.


​On October 16th, in Mogadishu, a double truck bombing resulted in over 300 deaths and hundreds of critical injuries. A definitive death toll may never actually be established, as rescue workers observed that many bodies would never be found due to disintegrating upon contact with the intense heat generated by the blast of the bombing. Al-Shabaab, an Islamist jihadist group affiliated with al-Qaeda, has claimed responsibility for the blast, claiming to have attacked a specific intersection to target ministers and security officials in the area. The capital of Somalia has been no stranger to conflict, as al-Shabaab has been active in the country since 2006, but this attack marked one of the most extreme incidents in the country’s history since the collapse of the Somalian government in the 1990s.

Somalia has been suffering through relative chaos for the past three decades since the collapse of its central government; countless transitional governments later, the promise of stability seems far in the future. The terrorist attacks in Mogadishu mark the deadliest incident in the country’s history. Yet the Western world stays silent—no Twitter hashtag, no Facebook filters for young activists everywhere to slap on their profile pictures and claim solidarity, no widespread social media campaigns to raise awareness and funds for the victims of the attacks. In fact, the incident at large has gone largely unnoticed by the general public, and largely unreported on by the mainstream media.

The same applies for the leaders of the Western world; there have been no world leaders reaching out to offer their condolences to the Somalian people beyond sporadic tweets, no aid being channeled into a country whose political situation grows increasingly bleak with each day, no speeches being made about standing in solidarity with Somalia. Although President Trump has suggested a stronger commitment towards stopping al-Shabaab in Eastern Africa, he has stayed silent on the bombings in Mogadishu; the only acknowledgement of the terrorist attack by the US government is a 100-word statement released by the U.S. Mission to Somalia. World leaders like French President Emmanuel Macron, Canadian Prime Minister Justin Trudeau, and UK foreign secretary Boris Johnson have condemned the attacks, but have failed to move towards any substantive action.

In 2015, Dr. Marco Iacoboni coined the concept of ‘the dark side of empathy’ to describe why the West willfully ignored a terrorist attack by Boko Haram that killed up to 2,000 in Nigeria, while showing full-blown support for France in the wake of the Charlie Hebdo attacks in France. He believed it was a result of wanting to empathize more with “people that are more like ‘us’” – a thinly veiled way of saying that the West tends to empathize more with people who are white.

To fully understand and examine the way the West reacts to terrorism, one needs to understand the two disturbing proclivities when it comes to reacting to terrorism: first, it does not warrant a reaction if the victims are not white; second, it does not warrant a reaction if it is carried out by a white individual or organization. If either tenet is present, people are far more likely to view it as an isolated act of violence or overlook the incident at large. Notably, as mentioned in the previous paragraph, the indifference with which the West reacted to the Boko Haram terrorist attacks versus the Charlie Hebdo terrorist attacks illustrates this concept succinctly. The first proclivity, in particular, applies directly to the recent al-Shabaab bombings.

The question that should be asked here is this: would the world have reacted differently if the Mogadishu bombings had taken place in Germany, or France, or the UK? It hardly warrants a real answer. 9/11 happened, and the world stopped turning. The Charlie Hebdo attacks were carried out, and the world proudly proclaimed “Je suis Charlie.” The Manchester Arena was bombed, and #PrayForManchester began trending within the next hour. All terrorist attacks were undoubtedly tragic, but it should be telling to see why exactly these incidents were covered so extensively and generated so much sympathy from the public, while similarly deadly terrorist attacks in Nigeria, Pakistan, and Afghanistan have not received the same amount of attention.

Some may argue that funneling humanitarian aid into Somalia would be ill-advised, as the corrupt government would not effectively distribute aid to its citizens. However, the far worse option is to simply do nothing. It is not enough to claim that nothing should be done to help the people of Somalia because of its corrupt government—it is always possible to help through giving funds to NGOs, or distributing non-monetary humanitarian aid. People are bombarded with news about destruction and death so often that many have become desensitized, and at times even callous, to the suffering of citizens in other countries. But as Dr. Iacoboni observed, this desensitization occurs only when the victims of attacks are not white.

In the end, the problem boils down to the white supremacy that pervades the Western world at large. The West opens its heart to some incidents and turns a blind eye to others due to this dark side of empathy; it is easier to ignore the suffering of people who do not look like us while simultaneously feeling sympathy towards the people who do look like us, especially when these incidents do not happen in proximity to the West. This type of violence and terror is implicitly seen as indigenous to countries like Somalia, while Western countries merit compassion and the attention of media. The governments of the West have a moral imperative to reestablish their commitments towards helping the people of Somalia, whether that be through economic support, increased intelligence sharing between countries, or  humanitarian aid, regardless of if the people affected are the “people who look like ‘us’” or not.